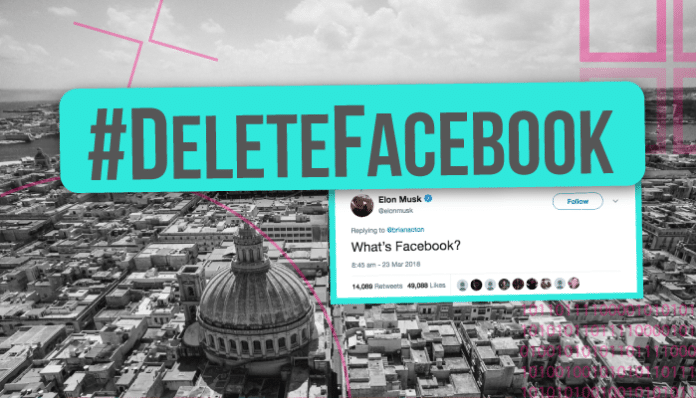 All around the world, #DeleteFacebook has been trending on all platforms, including Facebook. This hashtag started trending after the internet was flooded with headlines about how they have been selling data from over 50 million accounts to data mining company Cambridge Analytica. This news dropped Facebook shares by over 10% in two days equating to over $40 billion.

Huge names like the co-founder of Whatsapp, Brian Acton, and Elon Musk have joined and promoted the movement, deleting their Facebook pages with an audience well into the millions. This week, news of Playboy deleting their pages from Facebook surfaced, again along with over 25 million users.

With Facebook being so instrumental to marketing and business efforts, these actions are putting Facebook in the light, forcing them to put a smart speaker set to release on hold.

At Gadgets, we’ve been trying to imagine what a Malta without Facebook would look like. With more and more companies and people taking protest with the #DeleteFacebook movement it could very well become a reality.

Two words: Malta and politics. Without Facebook, our feeds wouldn’t be full of personal attacks and uncivilised discussions that take place everyday when a hot political topic hits people’s feeds.

It’s good to set New Year’s resolutions in order to make a more positive impact on society or do better this year for yourself. Although we don’t think your Facebook friend list gives a damn about you going vegan or going to the gym on the daily.

Well this might not end fake restaurant reviews in Malta as there are still other platforms where one can lie about the amazing experience they had at their friend’s restaurant. But this will certainly put a stint on biased restaurant reviews from friends or family of the owner.

Local news will take a hit

It has long been known that the upcoming generation in Malta get most of their news and information about what is going on in the country through Facebook. News platforms will have to rely on people keying in their website domain in order to get their daily news.

I mean, who else actually remembers all their friend’s birthdays simply by memory nowadays. People will be getting less birthday wishes than ever before, since it will take a phone call or SMS, not to mention remembering the birthday in the first place.

Facebook has moved from being a social network to being one of, if not the strongest advertising network in the world. Without Facebook in our lives, we will be exposed to less ads and might save some of our hard earned money too.

More time to do the things that make us unique

When it comes to the time we spend on Facebook, on average, the daily social media usage of global internet users of 2017, amounted to 135 minutes per day, up from 126 daily minutes in the previous year. That’s over 2 whole hours a day or 67 hours a month. It is time we start to think about what we all could be doing with 67 more hours of free time per month.

Has Facebook been integrated too much into our lives? Tell us in the comments.