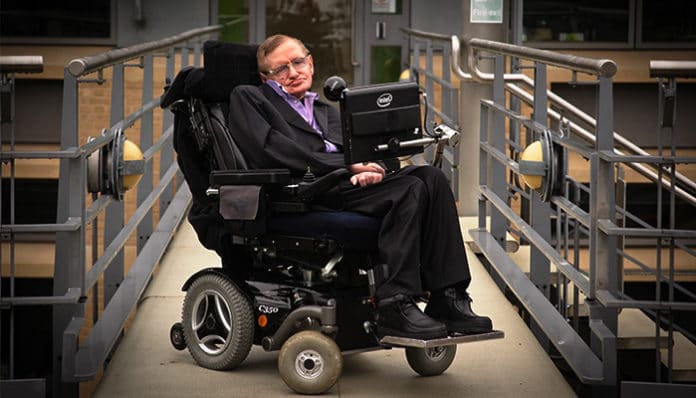 The most famous theoretical physicist since Albert Einstein, Stephen Hawking died earlier this morning at the age of 76.

At the age of only 21, Hawking was diagnosed with amyotrophic lateral sclerosis (ALS). The debilitating illness paralyzed him over time and restricted him to a wheelchair. In 1985, tracheotomy led him to lose his voice, but Hawking continued to be a hugely prominent and public figure through the use of his computer-aided speech system, which was operated by a single cheek muscle.

This did not stop him and earned the respect of his peers and rose to fame with his research on black holes. Stephen Hawking is most famous for his book, a 1988 best seller called A Brief History of Time.

Stephen Hawking made the theoretical prediction that black holes emit some sort of radiation that would eventually evaporate, which is often referred to as the Hawking radiation. Initially, this discovery appeared to him as some sort of mistake in his calculation but eventually he was convinced that his formula was accurate and on his 60th Birthday celebration in 2002 he said that, “I would like this simple formula to be on my tombstone”.

A news statement this morning read “Professor Hawking died peacefully at his home in Cambridge in the early hours of this morning. His family have kindly requested that they be given the time and privacy to mourn his passing, but they would like to thank everyone who has been by Professor Hawking’s side — and supported him — throughout his life.”

Our world has truly lost another humble genius and physics pioneer. Millions around the world compared him to Albert Einstein while Stephen Hawking did not agree with this comparison and said, “I fit the part of a disabled genius, At least, I’m disabled — even though I’m not a genius like Einstein. … The public wants heroes. They made Einstein a hero, and now they’re making me a hero, though with much less justification.”

“Remember to look up at the stars and not down at your feet. Try to make sense of what you see and wonder about what makes the universe exist. Be curious. And however difficult life may seem, there is always something you can do and succeed at.
It matters that you don’t just give up.”