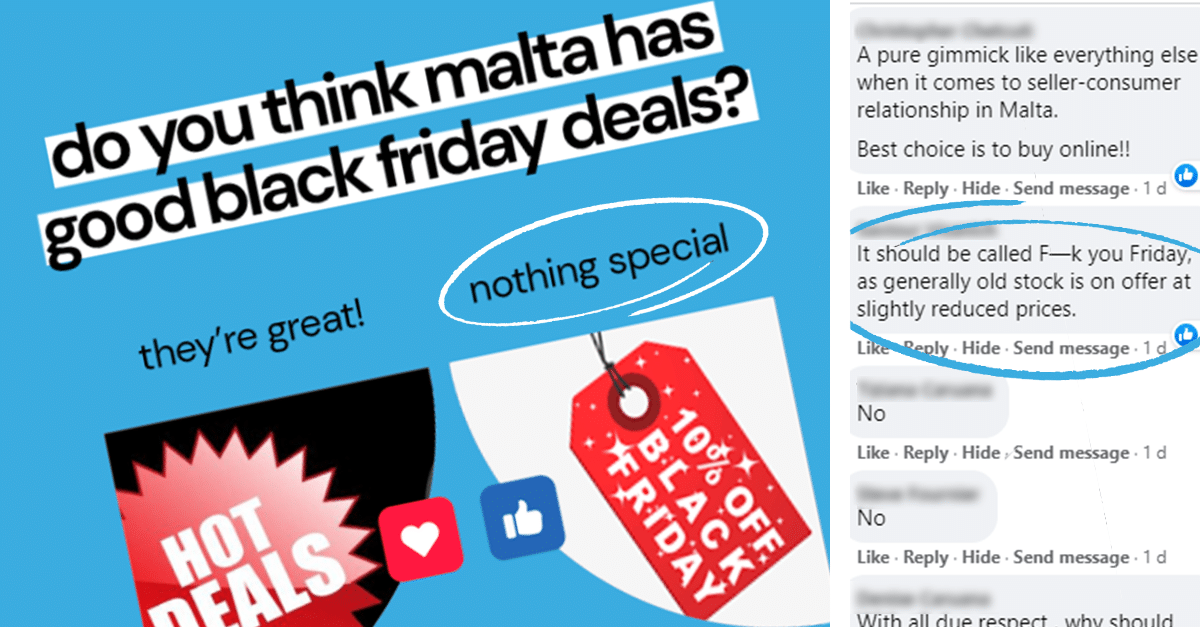 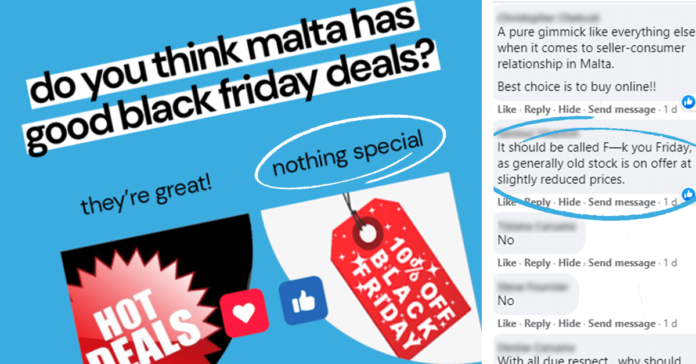 In a Facebook poll, we opted to pick local shoppers’ thoughts about the Black Friday offers of years gone by, and the answer was definitive, to say the least. Voicing what they thought was wrong with the offers also gives an insight into what shop owners can do to address the situation.

To start with, the score. 628 people said that the offers are nothing special, and only 10 said that the deals are great. There were actually more people who reacted with a laughing emoji than people saying they like the local Black Friday offers, which tells you all you need to know. Well, almost.

The comments naturally offer further insight into what’s running through Maltese shoppers’ minds. Quite a few people were in agreement stating that shops would increase their base prices ahead of Black Friday discounts, mitigating their losses to some degree. Some referred to the deals as “gimmicks”, “rubbish” and an “absolute joke”.

Others said that it’s no wonder people turn to foreign online stores, with some stores allegedly covering up older, cheaper prices. Others pointed out the fact that “real” Black Friday discounts are of 40% and 50% and more, whereas local stores go for 10% or 15%.

One comment claimed the current Black Friday deals are a reflection of the wider seller-consumer relationship in Malta, in that they’re “a pure gimmick”, explaining that the best choice is to buy online from foreign stores. However, one commenter questioned the entire backlash. “Why should Malta be obliged to follow foreign tradition when stores in Malta do sales more than 4 times a year already?!” She also said that COVID’s impact cannot be understated and that local shoppers should be thankful that most stores didn’t fire staff or go bankrupt.

Though this person’s thoughts were echoed by someone else, the overwhelming majority were not hesitant in pointing out that though costs went up for shops, they also went up for everyone else. The main issue, however, appears to be that compared to foreign brands, Malta’s discounts are not up to scratch at all.

Transportation costs have gone up all over the world, and Malta is not only no stranger to this, but given it’s only accessible by air or sea without the option for an EU-linked road network, there’s little local shops can do except pay that price and hope to recoup some of that in their pricing.

The downside to that, of course, is that their clients will bear the brunt of that. So, when Black Friday discounts are meant to be an opportunity aside from traditional sales for local shoppers to benefit from reduced pricing, it’s evident that they feel they’re losing far too often and the scales need adjusting.

Of course, there are those who get creative, which is why we need to mention The Designer, who came up with this gem.

What should be the minimum percentage on Black Friday offers?