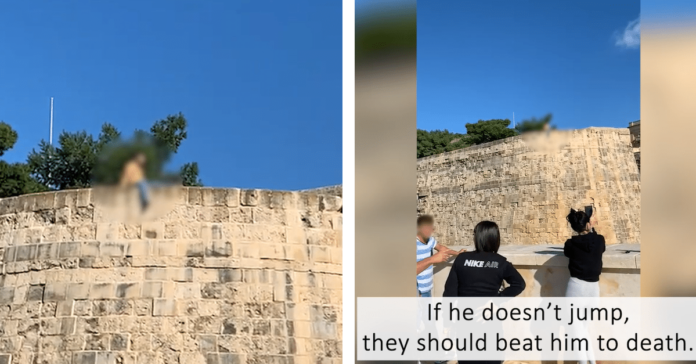 A video has surfaced showing a man sitting on the edge of a Valletta bastion threatening to jump. As the scene unfolded and some passersby attempted to get the man to safety, a slew of hateful commentary urging the man to take the next step off the edge was clearly heard in the video, drawing the ire of many online, but plenty of laughter from others in the video.

Waning mental health is a growing phenomenon that currently shows little sign of abating, and today might be a new low in terms of people facing difficulties seeking support in members of the public. The vile comments spewing from certain people, ranging from “he’s just doing it for attention” to “come one let’s see you splatter on the ground as I need to get to work” have been slammed by mental health campaigners.

The entire scene makes for sorry viewing, and really begs the question of whether people are aware of the power their words carry. Though people condemned the group’s actions, as police coerced the man to step away from the edge over a two-hour period, it’s worrying to see an entire group of people share such a despicable mentality.

Daniela Calleja Bitar, COO of Richmond Foundation, criticised the actions of onlookers and explained what should have been done instead. “First of all, under no circumstance, should someone urge anybody to jump,” she said. “Instead, the individual present should immediately call the police and an ambulance. If possible, the bystander should stop and speak in a calm tone. They should also try to encourage a conversation, making sure to keep calm throughout.”

Bystander effect is the term used to describe people who stop to watch a scenario unfold that is beyond what we’d consider normal. One example would be people gathering to watch the aftermath of a car crash. This is dangerous because it could limit access to rescue services as they make their way to the scene.

In this case, it’s far worse, because the scene was still unfolding, and had it not been for police intervention, we could have been writing a very different headline. It’s also a reflection of our relationship with technology and social media, where people felt the need to record the scene and even hope for a gruesome conclusion.

Kriżi can be downloaded via Google and Apple Stores, completely free of charge. If you’re sad, lonely or can’t cope, Crisis Resolution Malta is there to help. Call the free 24/7 crisis specialist line on +356 9933 9966.