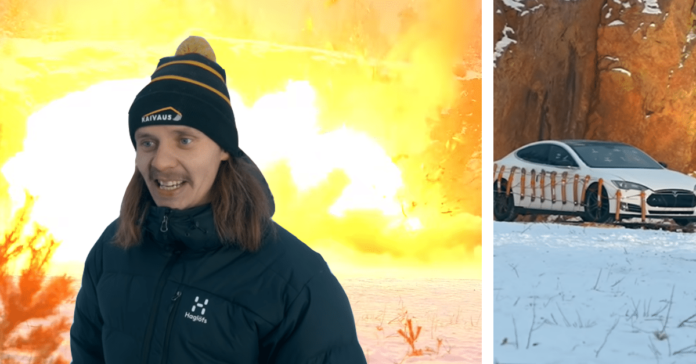 Have you ever been faced with the decision of replacing an expensive faulty part of your car? It’s most likely that you have. For Finnish Tesla owner Tuomas Katainen, “expensive” is a bit of an understatement. Possibly due to the cold weather, his 2013 Tesla Model S developed error codes after barely 1,500km and after taking his car to a Tesla mechanic, he was quoted an eye-watering €20,000 to replace the entire battery pack.

Ever sarcastically replied to such scenarios with “I’d rather blow the whole thing up”? That’s exactly what Katainen did, strapping 30kg of dynamite to the vehicle and recording the whole thing for our viewing pleasure.

Do not try this at home

Before anyone gets any ideas for an alternative NYE blast, the explosion was handled by explosions experts Pommijätkät, and everyone was safe behind a blast-proof screen. The whole scene unfolded in an abandoned Finnish quarry too, so that should put an end to any dreams you have of blowing up your own vehicle in your own back garden.

Having said that, there’s an undoubted element of satisfaction from the whole thing, with one (slightly bonkers) man giving the proverbial finger to the multi-billionaire Elon Musk, saying “screw your overpriced battery, here’s what I think of your car”, even telling the afore-mentioned mechanic what the plan was. We’re pretty sure the mechanic thought the guy was bluffing, right until this moment.

Speaking of Elon Musk, if you watch the video further below, the world’s richest man does make an appearance of sorts, as a crash test dummy with a picture of his face stuck to it is dropped from a helicopter, and promptly strapped into the soon-to-become-dust vehicle.

A cry for attention?

Of course, these guys had the time and resources to pull of this stunt, but why go through all that trouble? Well, sometimes an angry-worded e-mail and call to a sales rep just won’t do it. Instead, a viral video that’s been watched 3 million times in 10 days might just be the wake-up call to car manufacturers, especially electric vehicle ones, that some parts are ridiculously expensive and will put people off buying EVs.

Should he have gone to an alternate repair service that would have offered a cheaper solution? It’s unclear if Katainen ever did, and though it is one way of scrapping your vehicle, it’s not one that we’d recommend any time soon. The electric vehicle industry is constantly evolving and vehicles are always improving, so while videos like this are fun, watching EVs go up in a ball of (controlled) flame is most certainly not the best use for them.

But, to give a completely impartial summary, when Katainen was asked if he preferred being behind the wheel of the Tesla or behind the blast-proof screen, he replied: “Never had so much fun with a Tesla!”

Watch the video below and comment with your thoughts. The video is in Finnish, so make sure to switch on closed captions in English to follow what’s going on. The magic really happens at 5:08