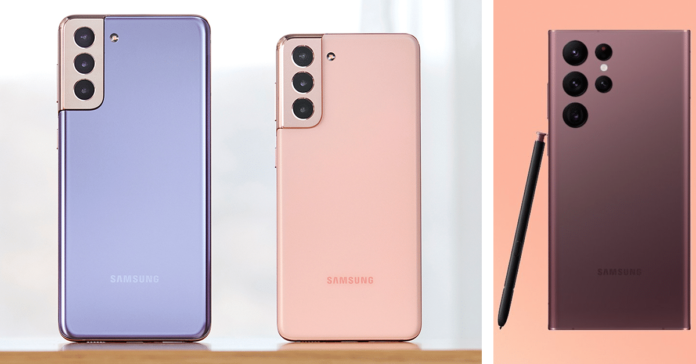 A video leak has just (allegedly) revealed what the new Samsung S22 lineup will look like and we are, to say the least, intruiged. The original video was eventually removed, but not before a number of people had managed to download it themselves. Some specs have been revealed too, so here’s all you need to know about Samsung’s flagship phone for 2022.

We’ve made notes about phone sizes getting larger, given the way they’re evolving to be our entertainment centres especially when we’re on the go. So, when it comes to the S22’s size across the lineup, it’s interesting to see that not only is the Ultra the largest from the lot, but its shape is also markedly different, opting for straight edges as opposed to curved corners on the other models. Almost like a Note, one would say…

Though these aren’t the actual phones, they’re dummy versions that are meant to represent as close a design as possible to the finished product before launch. So, given that there’s definitely some insider information at play here, what can we deduce? The S22 and S22 Plus carry similar designs to last year’s S21, although the S22 will (allegedly) have a slightly smaller screen in comparison to the S21, at 6.1-inches compared to 6.2 inches respectively.

Both are expected to have 50-megapixel main cameras accompanied by extra ultra-wide and telephoto cameras, but the S22 Plus is markedly larger, standing at 6.55-inches. Part of the spec sheet was also leaked, showing some pretty impressive details, not least the super clear Gorilla Glass for the rear camera, which prevents, to some extent, reflection or glare from messing up your photos.

What about the big gun?

As mentioned, it’s interesting that the S22 Ultra is so different from its siblings in this lineup, but of course, there’s more to it than just the appearance. There’s a built-in holder for an S Pen stylus, and there’s also no camera bump around the phone’s reported four cameras. Reports suggest these will consist of a primary 108-megapixel sensor, a 12-megapixel ultrawide, a 10-megapixel 3x telephoto, and a 10-megapixel 10x periscope.

All of that will be housed in a 6.8-inch phone, which is only marginally larger than the iPhone 13; could the iPhone 14 match it in size? We’ve already covered all we know so far about Apple’s upcoming flagship phone, which you can read here, but we’ll probably have far longer to wait for news on that front. Samsung typically reveals its phone in late January to early February, whereas the American tech giant opts for September-October releases.

Product leaks now go pretty much hand-in-hand with product launches; how better to build up anticipation than by revealing little bits and pieces until the day of the event? We’d not be surprised if the brands themselves had a direct hand in that, but who are we to judge? In any case, we can’t help but look forward to the soon-to-be-announced launch of the Samsung S22!

Like what you see so far in the Samsung S22? Tell us your thoughts in the comments!