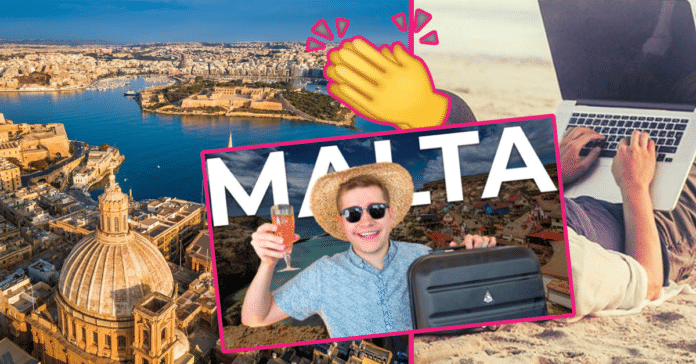 Malta’s plans to become a centre for digital nomads has certainly been picking up the pace, with rules coming into effect allowing people to reside in the country for up to a year on a digital nomad permit. However, one nomad who will be on his way soon enough is Charles Kerr, a YouTuber who also works with the YouTube Growth department with Google.

Taking the opportunity to work remotely in a country that has a couple of thousand more hours of sunshine than the UK, here’s why he’s heading this way.

Plenty of reasons to make the move

Similar to many others, Kerr cites the weather as a major factor in his decision. As a London resident, he admits that October/November means sun deprivation, and at this stage, Malta would have moved out of the crowded tourist season, even though the weather’s still warm and (mostly sunny).

Another reason he refers to is the way Malta handled the pandemic. Having kept numbers low when compared to other countries, Malta’s at the forefront of accepting double vaccinated travellers with ease and no restrictions. Avoiding the cost of PCR tests will surely be a deciding factor for many people, not to mention you avoid having someone try to scratch your eye through your nose with a cotton bud.

He also named three-pin sockets as quite handy, which is certainly the case for any Brits travelling to Malta, apart from the fact that we also drive on the same side of the road, and share a common language (second, in our case).

The main reason though…

Kerr, quite rightly, stated that practically, he could work anywhere he wanted, as long as there’s a decent internet connection. “Apparently, across the EU, Malta’s is like the highest-ranking country for fast fibre internet”. He also points to Malta’s nationwide 5G coverage as another important factor.

He did however say “I shouldn’t have any internet problems…at least in theory; let’s wait until I get there!”, before saying that now he won’t be able to use the “poor WiFi” excuse as a reason to drop out of an online meeting.

In conclusion, he explained how the main factor in his decision-making process is the cost of living which is similar to the UK, if not less. Stating that it’s around 40% less than living in London, it’s easy to see why, with all of the above, Kerr has opted to make his move to Malta.

He did mention that he’ll likely try one of the electric scooters, for which we’ve got a guide ready at hand to remind riders of the rules that are in place when using them.

Do you agree with his reasoning? Watch the full video below!