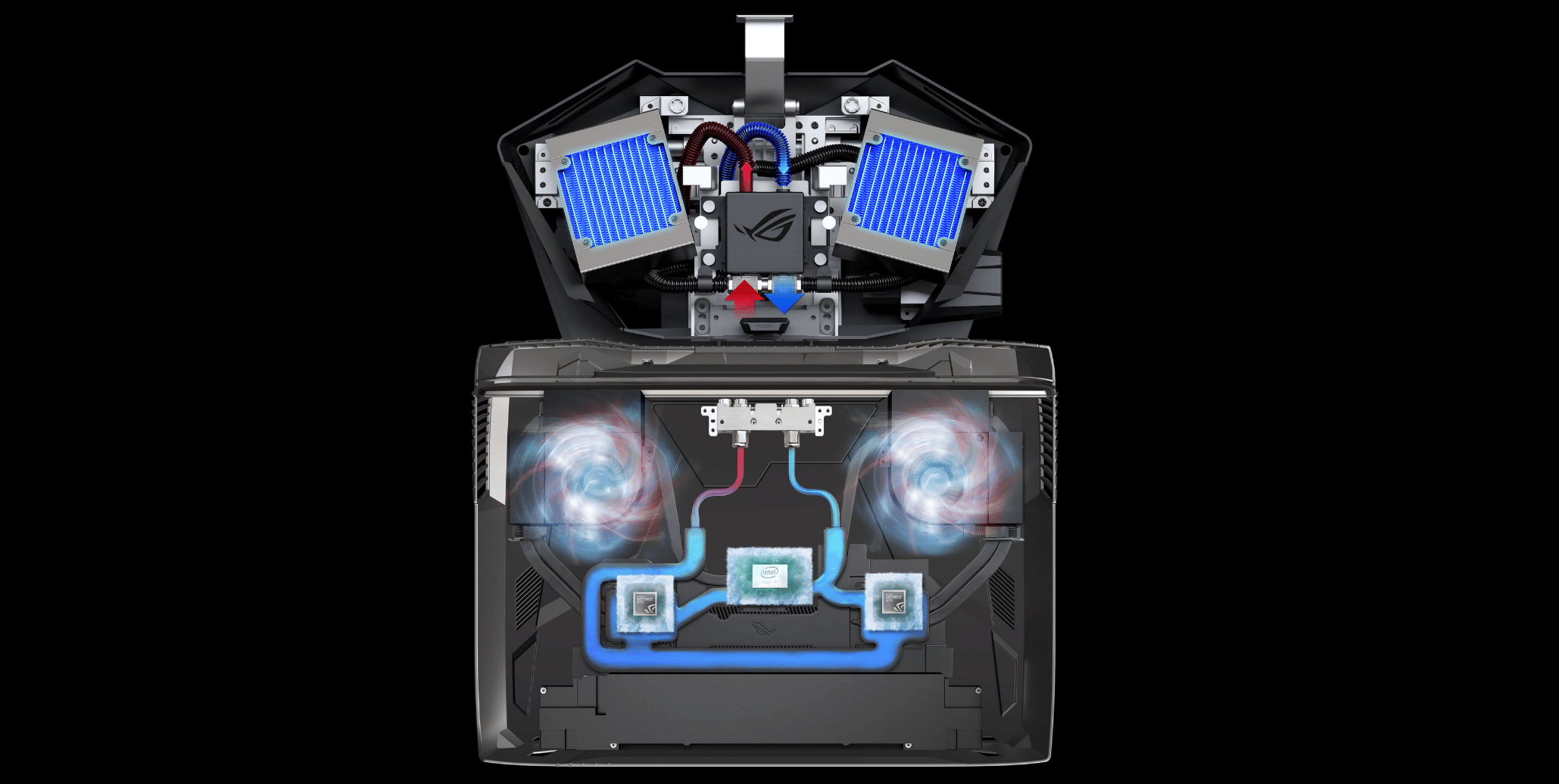 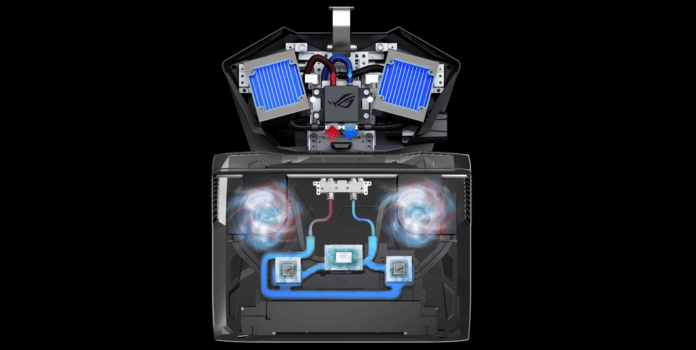 At the moment, liquid-cooled laptops are scarcer than hens’ teeth. The only option you have is getting the XMG Oasis external cooling dock and one of the four laptop models that support it. But could we see more liquid-cooled gaming notebooks in the future?

When looking at the current and future mobile GPUs and CPUs as well as the present state of mobile cooling technology, we can’t see the liquid-cooling laptop market getting more popular in the foreseeable future.

Because of that, we wanted to create an overview of today’s market and figure out why alternative laptop cooling solutions, as well as the vapor champer system pushed out the liquid cooled industry.

If you’re hoping for more liquid-cooled laptops in the future, we have some bad news

Let’s start by analyzing mobile GPUs and CPUs from Nvidia and AMD. While their desktop GPUs use more power than ever, their mobile counterparts are limited to sub-200W TDP. And by the looks of it, they’ll stay that way.

To explain why, we have to introduce something called heat density or heat flux. In a nutshell, heat density represents flow of energy per unit of area per unit of time. While the SI unit used for heat density is W/m², the world of microchips uses W/mm² for convenience sake.

An interesting trend that arises when you scratch below the surface is that the heat flux of mobile GPUs has stayed more or less the same for many generations. For instance, the heat density of the 2015’s GTX 980 mobile is .41 W/mm² – you calculate heat density by dividing the GPU’s 165W TDP with the size of the chip, in this case the GM204, which is 398 mm².

The main reason for heat density of mobile GPUs staying more or less the same across generations is because the higher the heat density, the harder it is to cool a chip. And coming up with new mobile cooling solutions isn’t as easy as it sounds.

No one wants to make massive improvements or maybe revolutionize mainstream laptop cooling solutions. Embarking on that kind of adventure would mean a ton of money spent on R&D, increased prices, and lower profit margins, in addition to years spent developing and testing novel cooling solutions.

And since we’re already at the limit of what mainstream laptop cooling systems can achieve, the heat density of mobile chips will probably stay the same in the future. On the flipside, laptop liquid cooling systems work best when paired with components that demand state-of-art cooling solutions.

So yeah, if Nvidia and AMD offer high-power mobile chips with higher heat density than the current generation, we might see manufacturers deciding to implement optional external liquid cooling systems in their flagship gaming laptops.

The reality, though, is that newer GPUs and CPUs are surprisingly power efficient. While manufacturers push desktop versions to their brink in order to get the most frames in games, you can achieve almost the same performance while considerably dropping the power usage.

For example, In his RTX 4090 review, Der8auer managed to get about five percent slower gaming performance, by capping the card’s power target to 60%. In other words, the RTX 4090 retains 95 percent of its original performance while using 283W instead of 420W. Considering that the 4080 TDP is set at 320W, we can guess the card will deliver a similar performance with a TDP of only ~200W.

The latest Ryzen processors are also pretty potent when power is limited. The R9 7950X has respectable performance even at 75W. In other words, as is the case with future mobile GPUs, upcoming mobile CPUs’ power requirements and heat density won’t increase anytime soon.

It’s not surprising that the current rumors place the max TDP of RTX 4000 mobile GPUs at 175W. The RTX 4080 mobile, most likely based on the AD103 chip, will have a heat density of .46 W/mm². That’s about the same as the GTX 1080 mobile, which was cooled without issues with regular, heat-pipe based laptop cooling systems.

Regarding AMD, the company will probably impose similar power targets upon the mobile versions of its upcoming RDNA 3-based GPUs. The reasoning behind this is that laptop manufacturers won’t make new cooling systems just to cool down RDNA 3 mobile GPUs.

Another reason why we probably won’t see lots of liquid cooled laptops in the future is the mobile vapor chamber technology.

In 2015, ASUS launched the liquid cooled GX700. The same year, the company also introduced the ROG G752. While not as exciting as its over-the-top relative, the mobile vapor chamber technology inside the G752 ultimately trumped the liquid cooling setup of the GX700.

A vapor chamber is more or less one giant heat pipe filled with a coolant liquid that heats up and vaporizes, thus cooling down the hardware beneath it. The vapor goes up and to the edge of the chamber, where it cools down thanks to heat sinks and cooling fans.

Now that we explained how vapor chambers work, let’s talk about why they’re generally better than mobile liquid cooling systems.

Also, let’s not forget that regular heat pipe-based cooling systems have significantly improved in the last five years or so. They have more heat pipes – some high-end laptops use as many as ten – and more fans – modern flagship models use up to four cooling fans – than gaming flagships of the past. For instance, even the ungodly ASUS GX800VH only had five heat pipes and two fans.

All of the above results in manufacturers either continuing to implement regular, heat pipe-based cooling solutions or vapor chambers instead having to make massive changes to their tried and true designs – while spending massive amounts of cash – in order to accommodate liquid cooling solutions.

An extra downside of mobile liquid cooling solutions is the fact they can only work with external docks that have to be purchased separately. The XMG Oasis will set you back $200 on top of the price you’ll have to pay for a laptop that supports it.

Next, each laptop that works with the Oasis has to include one extra heat pipe for the liquid cooling setup and an embedded connection system for the dock. This further increases costs and unnecessarily complicates the design of the cooling system. With so much going against them, we simply cannot see liquid cooling notebooks becoming more popular in the future.

While not necessary, liquid cooling would be a killer optional feature in flagship gaming laptops

As you can see, there’s still no need for liquid-cooling laptop solutions, even if we take into account the next generation of mobile CPUs and GPUs. Vapor chamber and heat pipe cooling systems are easier to implement while being noticeably cheaper and offering almost as good performance as liquid cooling setups.

However, considering the relative simplicity, affordability, lower noise, and a meaningful performance boost delivered by the XMG Oasis, we’d like for manufacturers to offer optional external liquid cooling kits alongside their upcoming high-end gaming notebooks.

Flagship gaming laptops with optional liquid cooling setups could be faster while running cooler and being quieter than competition. That last part could end up being the killer feature of flagship gaming notebooks of the future since being able to play games while not wearing a headset is laptop PC gamers’ wet dream.