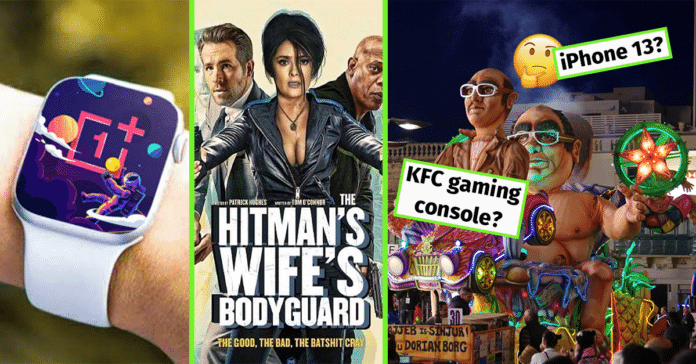 With Christmas behind us, our attention shifts to the new year and all it can bring. It’s a year we’re unlikely to miss, so here’s the tech we’ve got to look forward to in 2021!

We’re in for quite the treat when it comes to movies. From the comedy side, Tom & Jerry return to the big screen, as Space Jam and Coming to America 2 get hugely anticipated sequels, along with The Hitman’s Wife’s Bodyguard, starring Ryan Reynolds and Samuel L. Jackson.

When it comes to superheroes, there’s Venom 2, Morbius and Marvel’s Eternals that head the bill, with a ton of A-list actors taking part. Also, The Matrix 4 is expected to drop, so put the 22nd December down in your diary.

5G is set for a grander roll-out, as more telecom companies adhere to the new tech. Increased speed and lower latency won’t be limited just to our gadgets, but could improve traffic management systems too, among other things.

In terms of products, keep your eyes peeled for the OnePlus Smartwatch, LG’s rollable phone and Samsung’s flagship Galaxy S21. There’s also rumours that in autumn we’ll see the iPhone 13 and AirPods 3 from Apple, but there’s one more thing that’s left us in a bit of a daze.

Kentucky Fried Chicken is looking to join the world of gaming consoles. Their design, however, comes with a twist. The heat that’s produces by the console as it functions will be transferred to an area where you can place food. To keep it warm. That is next level 💩 right there.

As for events, it’s all still up in the air for now. Should the COVID-19 vaccine prove as effective as we’re hoping it will be, expect an entire slew of events to come your way. Music festivals such as Glitch and Annie Mac’s Lost & Found are scheduled for summer, but will 12th February be too early for us to celebrate Carnival?

What else are you looking forward to in 2021? Let us know in the comments!