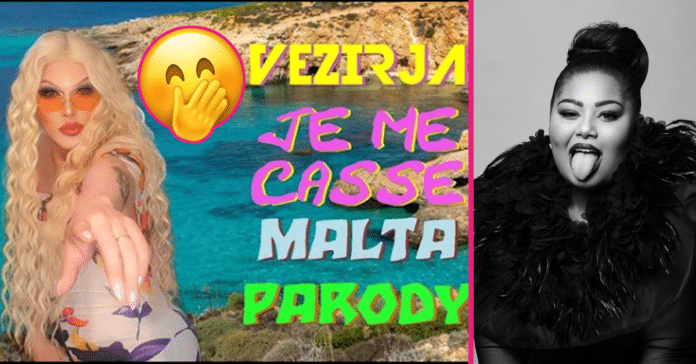 They say that imitation is the sincerest form of flattery. Guess that says plenty, now that Je Me Casse has got its second cover version! Following Pene Corrida’s metal version, Vezirja, an Albanian drag queen, has released a parody version, taking aim at an issue we have very little control over…

“A love letter to Malta”

Claiming it to be a “love letter to Malta and all my Maltese friends and family”, Vezirja takes a fun poke at the ridiculous heat the island suffers from every summer. “Hell no, Valletta won’t do”, the lyrics go, before continuing “Hell no, San Ġwann maybe too, wherever I choose to stay it’s gonna be humid anyway”. Hard to argue with that one…

The song continues, with the pre-chorus calling for someone to turn on the air conditioning because “this surface melts”, with the chorus “je me casse” being replaced by “I’m a man”. Our favourite part comes right after the first chorus though.

“I love this country, and they love me too…they call me ħamalla, I guess that’s good?“

For anyone unfamiliar with the language, no. No, it’s not good. The song overall is though, and we’re sure Destiny will enjoy giving it a listen too!

There is a dark hint at 1:35, where Ħamrun is mentioned: “with the dope and the crime, I’ll just like home”. Ouch.

What do you think of the song?