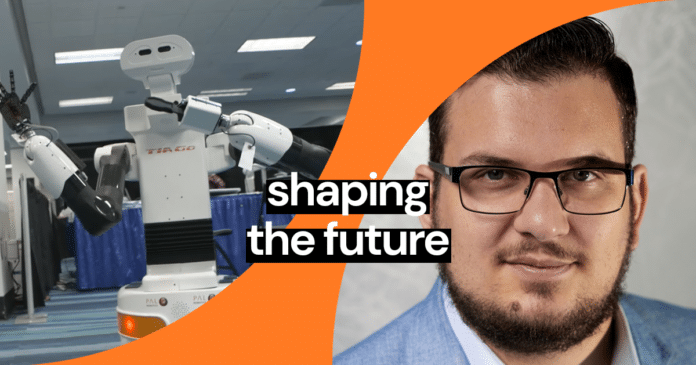 A Sheffield-based robotics company run by Daniel Camilleri is all set to start work on a Maltese school of robotics. Camilleri is cited as the main driving force behind the company Cyberselves. He spoke to Gadgets, saying that he is currently in Malta waiting for the first Pepper robot to arrive for Cyberselves Malta.

“In today’s world, we’re already seeing that more education in robotics is needed, as a shortage in qualified people in the industry is expected”, Camilleri says.

Camilleri’s robotics company has also just made it to the finals of an important international competition, the ANA Avatar XPrize which seeks to create an avatar system that can transport human presence to a remote location in real-time.

Cyberselves began as an AHRC-funded research project at the University of Sheffield (including partners in Oxford and Barcelona). Coming together at the intersection of psychology, computer science, cultural studies, and philosophy, Camilleri and his cohorts looked at what happens to human beings as we increasingly find ourselves engaging in immersive, digital cultures and environments, including everything from social media to virtual reality spaces.

In terms of the competition they’re taking part in, Cyberselves is just one of four UK or EU-based companies to make the finals, placing a very solid seventh out of the fifteen who qualified, down from the original 78 competitors in total.

Their robot, Tiago, is competing as an emerging technology to develop a physical, non-autonomous Avatar System with which an operator can see, hear, and interact within a remote environment in a manner that feels as if they are truly there.

“Cyberselves was set up with the dream of creating the Windows or Android of robotics”, Camilleri tells us. “The best way to explain it is to imagine a world where if you had a Samsung phone you could only run apps created by Samsung themselves. So if you need an app for your personal life or for your business you would have to get in touch with Samsung and lobby them to create the app for you”.

This is currently the situation in robotics. Every robot has its own niche and if you wanted to take an app that runs on robot X and run it on robot Y, it’s impossible. This is because different robots have different body shapes, different sensors and often different ways of programming them.

The breakthrough that Camilleri created at Cyberselves is a piece of software called Animus which does the following:

“The Tiago robot that we used for the competition is in fact not ours but a commercially available robot from PAL robotics which is a Spanish company”, Camilleri reveals. “We chose that robot because it best suited the tasks that were assigned for the XPrize semifinals. But in the end, Tiago is only 1 of 9 robots that form part of the Cyberselves ecosystem today and we’re adding more robots all the time”.

The next stage of the competition will take place in autumn of 2022, though the teams that qualified for the finals share a prize of some €1.7 million now. The grand prize is of nearly €7 million to be shared between the top placed companies.

“The software at the moment is very complicated and you’d need a Masters or entire months to learn how to program a robot. We see it as part of our job to create the next generation of workers that the robotics industry needs. Animus is perfect for this because it’s both easy to learn and in a day or so you can start experimenting, rather than still being stuck on learning a specific robot’s functions”.

Watch the competition announcement video below!