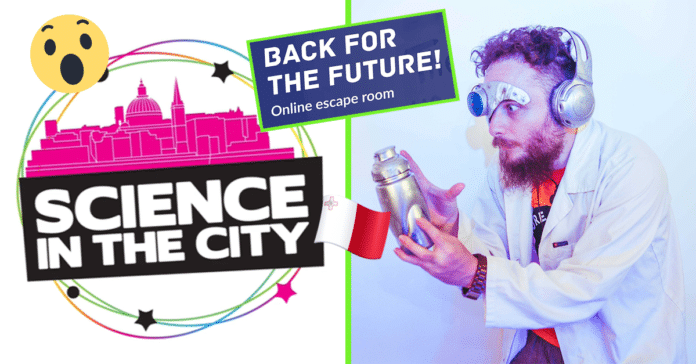 Whether you’re a science buff or not, there are plenty of reasons to follow what’s going on at Science in the City. From a sold-out virtual Escape Room, to theatrical performances and an animal-themed jazz concert, there really is something for everyone.

We had a quick chat with Dr Edward Duca, the founder of Science in the City, and it’s easy to tell he’s as excited as anyone for the events.

The Escape Room, which is Back For The Future-themed, was sold out within days, although it can still be followed online and live. “Our music and dance piece happening every night will be fantastic!”, he told us. “The plays by Malcolm and Angele Galea are a must-see, though make sure to book in advance.”

“It is the first time for all of us to do an event of this scale purely online.“

With the amount of projects shifting to online, including educators and where possible, some performers, most of those involved are already comfortable with going virtual, so these are exciting times.

It’s already been a month of constant activity, but starting Friday is where the hot stuff kicks off. 7 PM marks the festival opening, and the virtual Escape Room will follow soon after. Angele Galea’s “Jumping Genes” is a play that tackles issues women face in the industry, as well as domestic violence, all based on true stories.

Saturday gets a lunch-time kick-off, but the pièce de résistance arrives later at night, and is for the parents. A cocktail mixology event will bring the day to a close, as you learn about research disciplines and spirits.

Sunday morning sees us get another Escape Room event to start things off, followed by a BirdLife Malta event, and the aforementioned jazz event, among others. To close it all off is a discussion about the event’s overall theme: What does it mean to be Engaged, Empowered and Enabled in the 21st Century?

For one, this writer is most surely looking forward to it all!

Which events are looking forward to seeing most? Let us know in the comments!