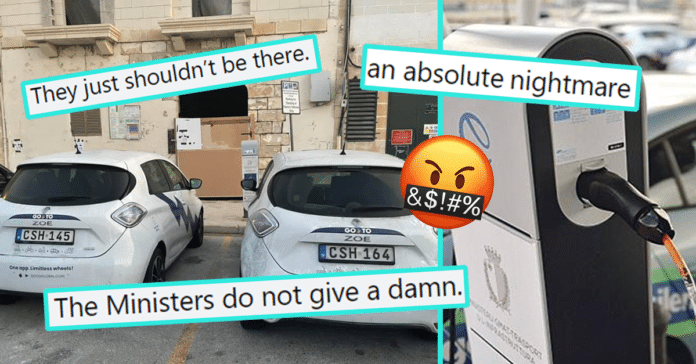 This title and statement was surely not part of the great plan of updating Malta’s ever-growing flotilla of road vehicles to electric ones. Unfortunately though, with each passing day, it would seem that the situation is getting worse for the current crop of electric vehicle owners, as one member lamented on Facebook.

Taking to local Facebook page Electric Vehicles Malta Community, the man cried foul on a number of issues, namely failing infrastructure, poorly demarcated charging bays and how in his four years of owning an electric vehicle, things have only gotten worse. However, one issue that’s surely grinding the community’s gears is how the charging bays are apparently constantly occupied by the same culprits.

The free charging stations always seem to be occupied by GoTo vehicles or ICE cars, the man claims, which should not be legal. With this in mind, he also bemoans the fact that there’s no enforcement on these infringements, before delivering his final verdict.

“If anyone reading this is thinking of going electric and you don’t have a garage, forget it”. Ouch.

He’s not alone either

Most, if not all the comments on the post were in support of the above statements. Though one person suggested the post author get in touch with the required minister to address these issues, the author was dismissive of the notion. “And accomplish what exactly?”, citing the fact that at this stage, the minister is probably preoccupied with other issues.

Recently Minister Aaron Farrugia said that by 2030, Malta should convert up to 65,000 vehicles to electric, in order to reach carbon neutrality targets. However, there are plenty of sceptics, even among those who already own EVs.

Some members said that EV users can charge their vehicles in their own homes and garages, but it might not be as simple as that. And when someone stated that reporting offending vehicles that are in spots that they shouldn’t be, the response quite rightly was that they’re not supposed to be there in the first place.

Getting the full picture

One Gadgets follower, Kris Scicluna, took to our comments section for this same article to give an in-depth look that paints a fuller picture of the situation and what can be done. Below is an excerpt of what he had to say, but you can check out the comments to read it in full.

“While the emissions generated by EVs are highly promising it is a multi-faceted issue. Expecting the government or the public sector to magically fill in the streets with EV chargers is unrealistic. Strategic improvements can always be made through zone development planning however this will not happen overnight.

“Buying an electric personal transportation vehicle to charge in a public space never did much sense anyway. The supply will never meet up the demand unless DC “fast” charging is readily available. There should be incentives for new residential and commercial developments to include the necessary electrical infrastructure.

“There are also issues with the single-phase supply being limited to 40 A at the time of writing. A 7 kW charger (single-phase assuming unity power factor) would approximately use 75 % of the available 40 A, leaving 25 % to run all the other appliances. Going to three-phase 60 A involves more expenses in wiring, application costs and metering charges.”

Are you a good person?

One theory of determining whether a person is inherently good or bad is the trolley test at a supermarket (if it’s one of those you don’t need to slip a euro in to use). There’s no reward for returning the trolley to its place, but you do it because it’s the right thing to do.

With the evolution of technology, the test has now been updated; will you park your EV in a place you’re supposed to, like a good citizen, or will you needlessly block a charging station? The choice is yours…

Will Malta ever fully embrace an electric vehicle culture, or are there too many obstacles?