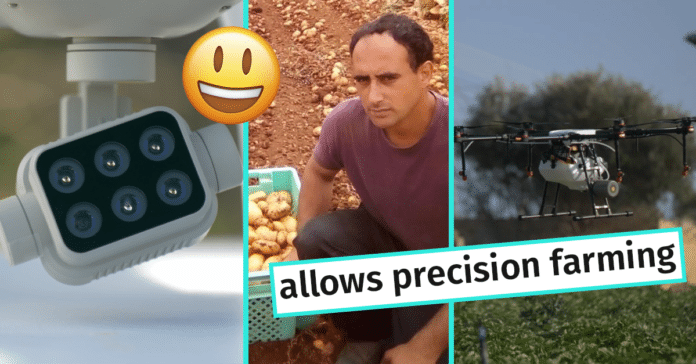 Farming is a practice steeped in tradition, whether it’s techniques or technology. When you’ve been doing something for so long, you might be reluctant to change, but it would appear that drones might be the latest gadget to lighten the load on our local farming community. Here’s how!

We spoke with Mario Micallef, one of the first farmers to test these agricultural drones. “There are plenty of benefits, like using a multi-spectrum camera which scans your land, maps it out and can identify any issues your crop may be facing”. The reason this may work better than the human eye is that not only does it happen faster, it may detect problems in plants earlier than we can.

Also, since the drones fly across the farming space, there’s no stepping onto the ground you’d have toiled to plough. A separate larger drone is also used to apply pesticides in what Mario refers to as “precision farming”.

“Precision farming means that pesticide isn’t applied across the whole patch of land, but just the particular area or areas that need it. It’s cost-efficient and not as labour-intensive. Any time spared from the routine is welcome!”

As Mario explained, this type of tech and its application will make the overall process more sustainable. For the food-providing sector, he says, it doesn’t make sense to ignore tech like this, as long as it’s used correctly.

A catch or two…

Unfortunately, there are downsides to the use of drones in these settings. “The camera needs to be used on a clear day with little or no cloud cover”, Mario says. “That’s just one part of weather affecting drone use; if it’s windy, you won’t be able to apply pesticide, as it will drift onto areas you wouldn’t want it to”.

Of course, this is all before factoring in an element that everyone understands: cost. One particular drone is needed for scanning and another for pesticide. For the former, since plots are relatively small, more precise software is needed, which ramps up the cost. For the latter, despite being quite a hefty drone, the amount of pesticide that can be filled is a bit limited.

“In the end, depending on many different factors, it might not end up saving you as much time as you’d have hoped”, reveals Mario. But it’s not a nail in the coffin either, he says. “At the end, it depends on the size of land you have, and what crops you’ve got. If precision farming makes sense for both of these points, then the drones will help”.

When talking about farming, the same question always crops up. How does the community look to entice young people to take up farming? Could this type of tech help?

“It varies among people”, Mario replies. “In my case, it won’t be a drone that convinces me to stay or go, but if there’s more tech lessening manual labour, it will probably convince more people to join”. The cost might remain an issue, but the truth is that with the passing of time, the price of new tech reduces.

Also, the recently implemented drone regulations might be a bit off-putting. Each flight requires a permit application, and of course, prior to that, is the training, licencing and so on. It might be necessary, but that doesn’t mean it isn’t tedious. Especially in the long run.

“It’s not just about young people though”, Mario concludes, with a slight hint of a smile. “There are people over 60 years of age who’ve asked me about using drones.” As long as it gives the same result or better, it will encourage people to either embrace tech in their practice, or take up a life in farming.

Do you think that tech can help the local farming community grow?