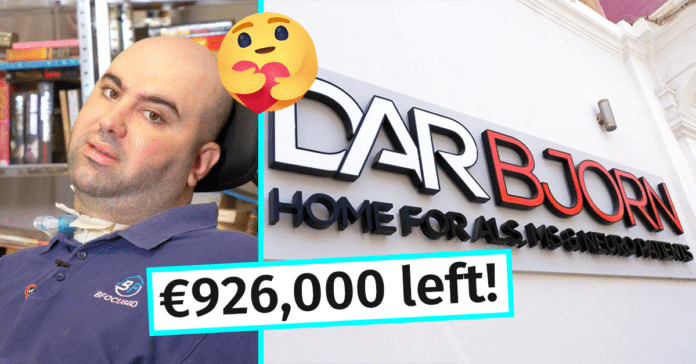 Recently, we met with Bjorn Formosa, the ALS activist with superhuman perseverance pushing to make life as easy as possible for others with ALS, to discuss not just the tech Bjorn himself uses, but also the tech that’s power the current Dar Bjorn, as well as how Dar Bjorn 2 is shaping up.

Bjorn was first diagnosed with ALS some six years ago. That in itself is an achievement, as most with the disease rarely live beyond five years with it. “The diagnosis came around this time six years ago, however, some of the milder symptoms would have appeared around a year prior to that”, he reveals.

Needless to say, technology has had to play a major part in Bjorn’s life, not simply to make his life easier, but to simply keep him alive. “I’ve always dabbled in tech, but I never expected to implement in a way that allows me to live, every second, every breath,” he remarks. Tech plays an important part beyond staying alive, as it also facilitates communication.

Here’s how it works

Since hand movement begins to deteriorate as ALS progresses, special computers are needed to aid patients to continue working. Using the Eye Gaze software, people with ALS can use their eyes instead of a mouse and pointer.

“Eye Gaze started off with a medical study that tracked pupil movement and how they work. The study was then implemented into a software & computer, & through an infrared camera which reads eye movement, translating that into mouse clicks or moving the pointer. It allows me to design, code & do practically anything done on a normal computer.”

At Dar Bjorn, everything is as centralised as possible. Anyone wanting to use tech can do so once their computer has been set for them. Through it, they can control the room’s lights, television, sound, blinds, and AC settings. “Basically, anything that’s programmable or sends out an infrared signal can be connected to the central server and through eye movement and the computer’s software, one could control the room”, Bjorn proudly states.

With Dar Bjorn 2 on the horizon, it’s difficult not to get excited. “The new place will feature lots of advancements!”, Bjorn says. “My dream is to have everything in there in a centralised system, including a pool that can be controlled in terms of how much chlorine and salts are added remotely, without anyone having to do so physically”.

He also explained that there will be rooms requiring retina scans for entry, increasing security on floors where many people will be moving through. The idea of making as many things as possible remote-operated is to limit the threat of human error and ensure continuity in the service provided.

Sunday 26th September 2021 is the day when a major push towards collecting the remaining funds is taking place. “I’m hoping that this is the final fundraising event we hold for Dar Bjorn 2”, Bjorn explains. 926 is a significant number here; not only is it the date when the event is happening, but €926,000 is the amount left to collect to ensure the home is completed.

“I’m sure that we’ll reach the target, and in fact, I thank the Maltese population for their generosity in advance.” Save the date and don’t forget to donate!