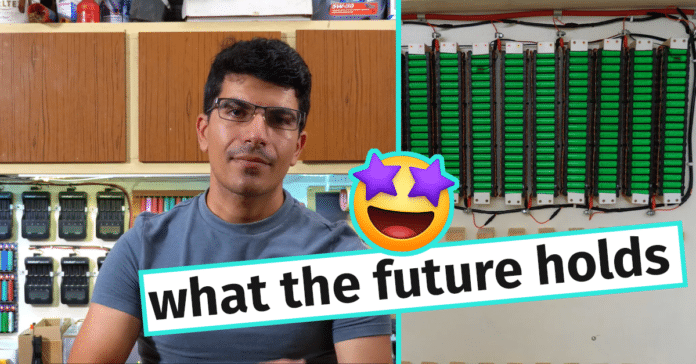 Inspired by Tesla, Maltese architect and DIY chief Roderick Bugeja put together a power wall project that powers his home. The twist? It’s done using recycled batteries. When we featured this project recently, even we couldn’t anticipate the overwhelmingly positive feedback that came with it.

From people lauding his intelligence and creativity, to others asking in-depth questions about the project, we felt that to really do the project, and Bugeja, justice, we’d delve a little deeper into the inspiration behind the project and what lies ahead…

Small steps lead to something big

From his explanation, it’s evident that Bugeja is the kind of person who once he embarks on a project he doesn’t quit until it’s done. Considering this power wall took nigh on five years to complete, it’s a lot of motivation to maintain for a long period of time. But, he takes it all within his stride.

“I always love watching DIY videos, and I always ask myself ‘is this something that I can do?'”, Bugeja tells us. “If the answer is yes, then I see if I have the budget for it, and I’ll start working on that idea”. While five years of battery collecting is a lot, it was not for a lack of trying other methods.

I asked a lot of companies, including WasteServ, if there are any batteries that they could donate, but it would usually go against company policy to do so unless it’s for a school project. However, one company, WEEE Malta was kind enough to help me.”

Speaking of school, Bugeja graduated in structural engineering, so the electrical engineering side is self-taught. “With the right Internet research, you can complete practically anything”, he states confidently, adding that the five years of limbo were actually well-served.

“I learn a lot from the videos I watch and the communities I’m part of on social media taught me too, both from their successes and mistakes. Any mistakes they made, I knew not to repeat! As I slowly built my collection of used batteries, tech continued to advance in the meantime, meaning they too were becoming more efficient.”

Having started off small by using recycled batteries to power gadgets like torches and speakers that would run for 12 hours without charge, Bugeja got to thinking about taking things up a couple of notches. With more batteries of the sort, he could power his home.

One year down the line

Despite some scepticism from family, Bugeja managed to put everything together and got the system running. “My budget for the whole thing was my stipend, although my father did help me buy the inverter”, he reveals. Would he look to commercialise this system though?

“Not in this form, no”, Bugeja explains. “Since I’m using used batteries, essentially I don’t know when they’ll give out, as they’ve got a shortened lifespan. They’ve been going for a year with no issues, but it’s difficult to precisely calculate their longevity, so it would have to be a system with new batteries to guarantee a more efficient and longer serving power source”.

What he does wish to do with recycled batteries, however, is sell them individually for small gadgets, like the aforementioned torches, headlamps, speakers and so on. It’s a form of upcycling that will keep down costs and addresses another issue that appears to beset Malta: the importing of batteries.

“It’s an issue I can’t really understand”, Bugeja says with a hint of exasperation. “Whenever I’ve tried to import a battery to Malta, the company refuses to proceed; they’ll ship it to Italy, but then tell me that it’s up to me to have it shipped to Malta from there”. Since we’re moving towards an e-economy where the focus is on such batteries, imagine having a problem with your e-vehicle battery, and you can’t import a replacement immediately.

In this case, making use of recycled and upcycled batteries would reduce the need for importing.

What does the future hold?

Though everything is self-taught for Bugeja in these matters, he does have words of caution for those inspired by his work. “You need to know what you’re doing when trying these things; it took me a long time and plenty of caution when handling my first battery”. Once he got the hang of it though? “Then I could prepare around 20 or 30 kilos worth of batteries, checking if they’re viable or not. Even those that are not viable, I was taking them apart, further separating waste and helping the recycling process even more!”

In terms of future projects, Bugeja is never short of inspiration, motivation or ideas. “Though I have many projects running at a given time, my current focus is a dinghy that I’m working on. The engine will be powered by a car radiator, while the gearbox is built from an angle grinder”.

While that’s in the short-term, long-term Bugeja has set his sights on EV batteries, which tend to be replaced once their longevity begins to wane. However, he already has ideas for their home use. “A typical Maltese family will use around 12kW a day; a Tesla Model S battery can provide 100kW, which could power their home for eight days without charge!”, Bugeja enthuses.

It’s also a fantastic way of giving these batteries a second life, rather than simply dump them into their own landfill. We’ve got to have a plan for these batteries, and if we are to truly evolve towards a circular economy, then it’s through people like Roderick Bugeja that we can truly get there.