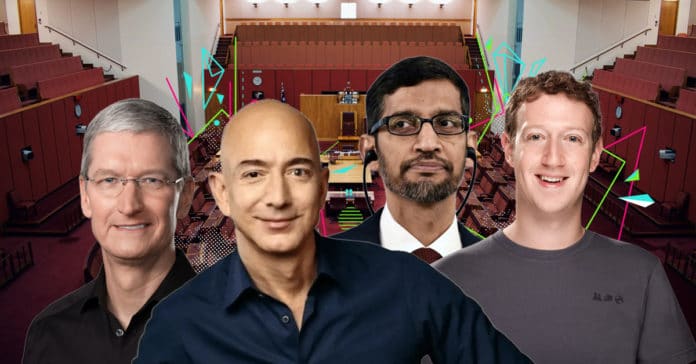 Yesterday’s hearing has the makings of a great intro for a new series, or at least, a movie. Imagine: four companies with a combined wealth of $5 trillion. They have effectively become more potent than most banks, and are considered to now be unable to fold. “But if they did it legitimately, what’s the issue?” Unfortunately, legitimacy in these contexts can be somewhat flouted or ignored, so let’s sift through what was said.

The fact that both Republicans and Democrats are worried about the size of these companies should set emergency lights off. That all four of them exhibit very similar behaviour that goes against natural competition should get that WW2 wailer going too. Apple and Amazon both exert strict control over who can sell what, and the latter has been known to monitor sellers’ data and whether they should come up with their own version of the product. Although Jeff Bezos said that it is against company rules to do that, he admitted that some employees may have done so and are being investigated.

Google search: “how to buy out competition.”

Around 10 years ago, e-mail exchanges showed that Google was closely monitoring potential competitors, with a view to just drown them or simply buy them out. A quote from Brian Warner even states that if you’re considering opening a web service, don’t. “Launch a lawn care business or dog grooming business – something Google cannot take away” as soon as you’re thriving. Yikes. To that, Sundar Pichai simply stated that for him, running the company means giving users what they want. Now make of that what you will.

Speaking of buying out the competition, here’s a straightforward one. This is the summarised conversation between Mark Zuckerberg and CFO David Ebersman. 45 minutes after sending the original message, Zuckerberg felt the need to state “that’s not what I meant”. Yeah. Sure.

The idea is that by buying Instagram or similarly innovative products for their time immediately would give Facebook enough time to integrate into their platform before anyone else can. Put simply, it not only removes Instagram as a threat, but integrates its’ users into FB immediately. In the meantime, other social media sites not owned by The Zuck are scrambling around, trying to get Instagram to work on their platform. All in all, not very nice of him.

This saga looks set to drag on for a little while longer, the main issues being that it’s difficult for Congress to pass legislation to actually control these giants. People like Donald Trump (of course) and Elon Musk are having their say on the matter, but it seems little is about to change for now.

For more information on each company’s hearing, visit the links below:
Google: https://www.theverge.com/2020/7/29/21346999/google-sundar-pichai-antitrust-hearing-business-model-david-cicilline-questioning