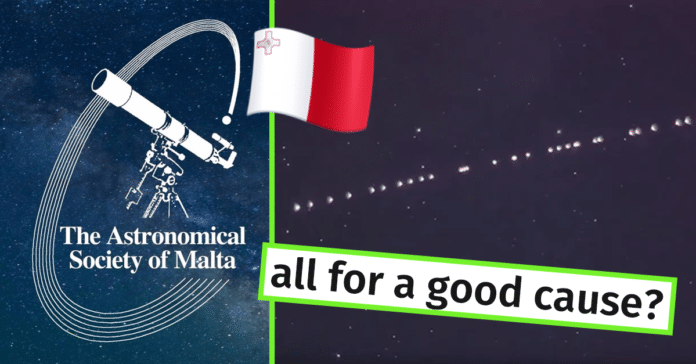 They’re practically visible from all around the world, with sightings reported from country to country, including Malta. First things first, they’re no aliens taking a closer look at our planet. Also, they’re not stars that have randomly aligned signifying the end of the world. No, this is all Elon Musk’s doing, but is there a good reason for it?

A constellation of satellites

We had a chat with The Astronomical Society of Malta about the whole saga, and they explained that the Starlink constellation, as it’s officially known, currently has more than 1,600 satellites in it. With more being added on a monthly basis, the total will be of around 12,000 satellites.

As ASM president Andrew Finch explained, however, just because they’re over us, doesn’t mean we’ll be able to spot them every time. “To spot them requires an optimal angle between the observer and the sun so that we can see the light they reflect”, he says. As can be seen from this tracker, while a decent number of them pass over us every day, only a few of them are actually visible to the naked eye.

Not everyone’s happy about it

Imagine being an astronomer, by hobby or profession (especially if your work depends on detecting minute changes in the night sky), and suddenly your studies of the night sky are interrupted by a large number of blinking lights. The reason for this is because the first Starlink satellites launched into orbit had little or no consideration for reflections and whom they may bother.

“After noticing the scale of this issue, SpaceX has been taking measures to reduce the problem”, Andrew states. “The first attempt came in the form of what they called “DarkSat”, which was a version of Starlink that had an extra anti-reflecting dark coating”. A study was conducted and concluded that this reduced the reflected light by half and made the satellites virtually invisible to the human eye.

Now, while that may be a step in the right direction, it’s still not enough. While it was successful in blocking the reflections of certain light frequencies, the coating caused the satellites to heat up and start emitting more than before in the infrared region.

The second attempt at fixing this is the Starlink version “Visorsat”. This version has a dark sunshade to prevent reflection. With some dismay, Andrew notes that little to no study has yet been conducted on the efficiency of this latest attempt due to the COVID-19 pandemic.

It’s for a good cause though

Despite all of these issues, the endgame is a positive one. These satellites will beam down internet connections to remote areas that have difficulty connecting, or literally don’t have internet available. Improvements will be made in terms of communication systems, schools and medical facilities, so the sacrifice will (hopefully) be a short one.

Andrew concluded on a reflective note. “The issue for both amateur and professional astronomers alike is great, but fortunately it seems that SpaceX is putting in the effort to mitigate these issues as much as possible. Whether this will remain the case in the future, and whether other companies setting up similar constellations will do the same remains to be seen.”

Until then, keep your eyes open for what looks like Orion’s Extended Belt, and keep track with the handy tool mentioned earlier.

Have you seen the satellite constellation yet?