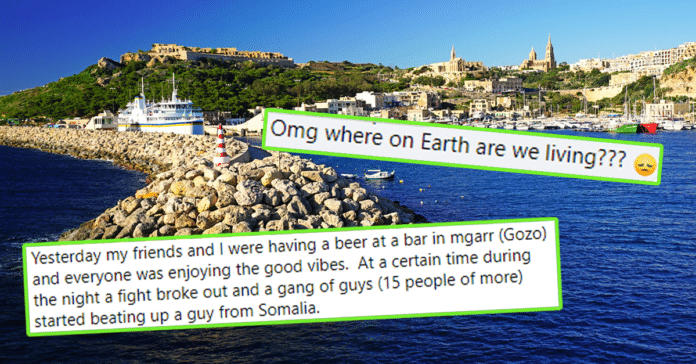 A post made to Facebook on Sunday 18th July told the harrowing story of a Somali man who was beaten and thrown into the sea at Mġarr Harbour, Gozo. Though the person writing the post called on the rest of the population to come together and become a better society, not many people commenting have the same kind of faith.

According to the post, the Somali man was not given a moment to catch his breath, being “relentlessly” beaten down. Possibly worse than that, from a societal point of view especially, was the crowd of people that cheered for these actions, even as the man was thrown face-first into a boat in the sea.

Though the police did intervene and two people are being interrogated and will be charged, that’s just the surface of the problem. There was a group of at least 15 people who administered the punishment, but a much larger crowd supporting them.

So, while the offenders will face a punishment of their own, there’s a wider issue that needs addressing.

The comments were a mixture of disgust, sadness and anger, with many questioning how the Maltese, renowned for their welcoming nature, could slip to these lows.

As the investigation progresses, police confirmed that they received a 1 AM report of a fight and did stop an argument, although it only states that there was a fight between two people, with no mention of groups, cheering or otherwise.

Read the post in full below. Does Malta have a problem with racism?