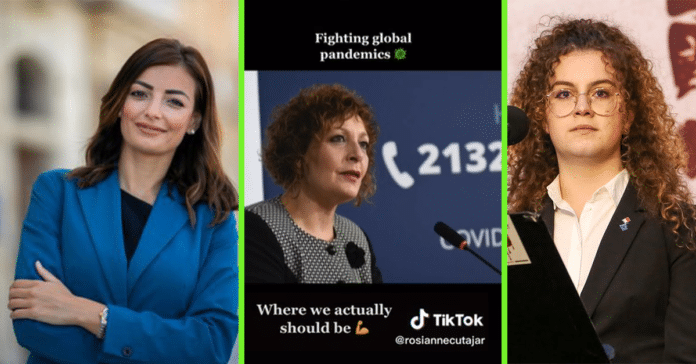 A couple of years ago, this headline would have looked way out of place, but this is 2021. It’s so “at home” you could even give it a pair of slippers and a mug of tea. But, if you’re still not sure what’s going on, here’s the lowdown.

The way the trend works, the user is first shown in “normal” attire with Nelly’s “It’s Getting Hot in Here” playing. The music changes to Erica Banks’ song, “Buss It,” and the TikToker is then all dressed up, performing a different dance.

Rosianne Cutajar’s video showed no such thing, and we applaud the initiative. The first part of the video showed women performing various chores, captioned “where sexists think women should be”. Cue music switch, and we’re instead shown some of Malta’s leading female role models, including Cutajar herself. And Charmaine Gauci, of course.

One omission conspicuous by absence is that of Roberta Metsola, one of Malta’s highest achieving politicians in recent history. When this was pointed out, Cutajar simply said “Do one yourself and include whoever you wish. Thank you”.

Things then really got interesting when PN activist Eve Borg Bonello commented with this: “Musumeci said that you want charismatic women, because you killed the last one that fought for the truth. You beg Yorgen for money and then you have the gall to say you are liberal”. Yikes.

Cutajar was in no mood to hold back either, replying: “Beg? Are you serious? I don’t need to say I’m liberal, my work speaks for itself. You aren’t saying that the PN are liberal now are you?”.

The back and forth continued, with questions about Jason Azzopardi’s shady deeds and Alex Agius Saliba’s fashion choices among others. One thing is for sure: it was surely more entertaining than the first Trump vs Biden debate. Could we see these two rising stars face off on a national platform in the future? And should politics have a place on TikTok?

Tell us what you think in the comments!