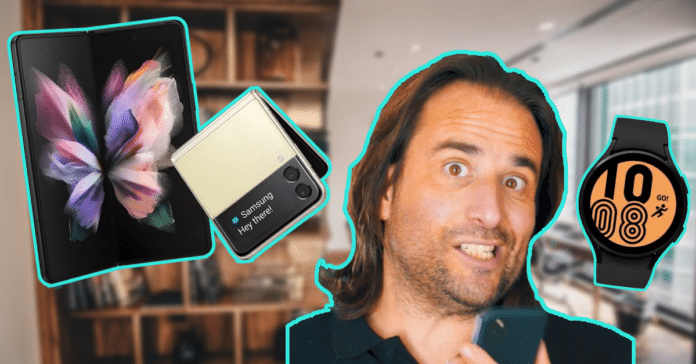 It would appear that leaks about upcoming tech gadgets are just part and parcel of the event itself. Speculation is not just rife; nowadays it’s also very well informed. And in Evan Blass’ case, scarily well informed, considering his recent announcements on Twitter in relation to Samsung’s upcoming Galaxy Unpacked event.

So, we spoke to our own resident Samsung fanatic Ian for his thoughts

Foldable phones are making their way slowly but surely onto the scene, and in their next event, we can be 99.9% sure to see the third generation of Galaxy Z Fold (coming in white, green, and black) and Galaxy Z Flip phones (coming in purple, black, gold, and green).

“In terms of these phones”, Ian explains, “there’s not much of an update compared to the 2nd generation, which I’ve got right now.” He does cite the camera behind the screen in the Z-Fold, but other than that? “I’m happy with what I’ve got, so I’m unlikely to switch any time soon”.

The other phone mentioned in the rumours is the alleged Galaxy S21 FE. Standing as the mid-range S21, FE stands for Fan Edition and will present Samsung’s flagship Galaxy model in a more wallet-friendly package without sacrificing too much in terms of quality.

Despite his Samsung allegiances, when it comes to smartwatches, for the time being he’s very much in Apple’s court. “I’m looking forward to the watch, actually, because it’s the only hope we have for something that can compete with the Apple Watch”, Ian revealed. “Even though I can’t use it with Android devices, it’s still my favourite”.

According to some sources, it should come in 44mm and 40mm. Blass shared GIFs of the watch in gray, dark green, white, peach, and two tweets of a black watch.

And last, but not least, from this reveal are the Galaxy Buds 2. Not much to talk about in terms of confirmed specs, although active noise cancellation is most certainly going to be included. The GIFs show the buds and the inside of the white case in grey, purple, and white, matching the style of a leaked render shared by 91mobiles that showed green, black, and white bud / inner case combos.

Which Samsung Galaxy products are you most looking forward to? Let us know in the comments!