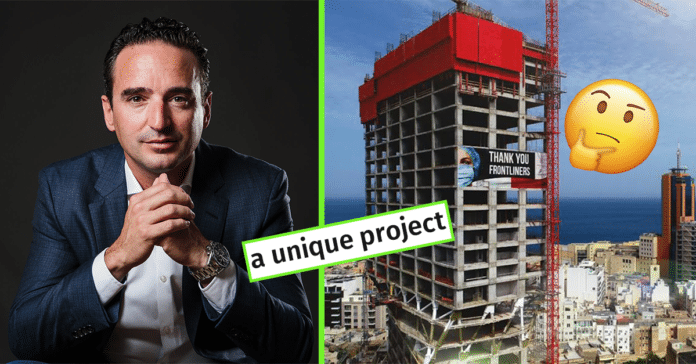 If you’ve spent a day in Malta, there’s a good chance you’ve seen the 33-storey building that is Mercury Tower in St. Julian’s. Late last week, property magnate Joseph Portelli featured in an episode of BE Luxury, to discuss some of the unique project’s features, as well as some of his own experiences in the industry.

No matter your views on the subject, there’s no doubt that project is unlike any other in Malta right now. It is one of Zaha Hadid’s last design sign-offs before the legendary architect’s untimely passing and the finished structure will incorporate both old and new design elements.

One unique internal feature as described by Portelli during the interview has to do with waste disposal. Since it’s going to be a tourist-centric development, and plenty of garbage will be created, the developers have an ice-cold plan to deal with smells.

“It’s all about details”, he said, “it will all go into a fridge so there’s no smell”. For Malta particularly, it’s a revolutionary practice which could well set the standard for future similar projects.

As mentioned, it’s a massive project, but the expected opening date is September 2022. The tower will be host to over 260 residences and with the option to be managed by luxury 5-star ME by Meliã of Meliã Hotels International, it takes leisurely living to new heights. Around 120m, actually.

Of course, what Portelli hopes for, as he also mentioned, is that it sparks a change in the area of Paceville. Loved and hated in equal measure, the place is crying out for a degree of adequate development. Not in the sense that youngsters don’t have a central place where to party, but at least, the area’s face gets a bit of a lift. And maybe have a bit more variety reintroduced.

What do you think of the Mercury Tower project? Let us know in the comments!