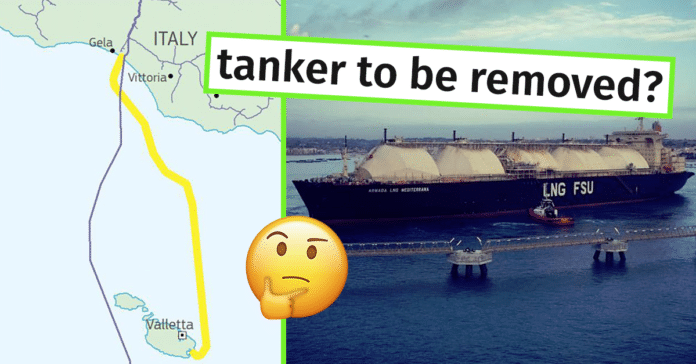 Construction for a new gas offshore pipeline between Malta and Gela in Sicily has been given the go-ahead by the Environment and Resources Authority, a move which could see the eventual removal of the LNG tanker sitting off the coast of Marsaxlokk.

What the project consists of

The approved project will see the construction of a new access road, land reclamation for a terminal station at the Delimara Power Station, onshore micro tunnelling across the Delimara Peninsula and the laying of the offshore pipeline to Gela.

The main points of concern relate to the impacts on the natural cliffs due to rock cutting from the proposed construction of the new access road, coastal land uptake mainly due to the land reclamation component, visual amenity in relation to the construction of the terminal facility and on geology due to trenching and dredging works.

In terms of ecology, the assessment identified impacts on benthic species due to excavation and trenching and installation of pipeline support structures and cable crossing structures; and impacts on terrestrial protected shrub species from interventions on the cliff face.

In relation to avifauna, the assessment identifies illumination impacts from working vessels and the terminal facility. The impact significance of each environmental parameter depends largely on the thorough implementation of pre-emptive safeguards, construction and operational mitigation measures, namely the use of silt curtain and suction dredger, air bubble screens, monitoring during construction (weathering rates in tunnel; rock stability; injured bird species and artefacts) oil spill prevention and response plans; and transplanting and monitoring of benthic assemblages.

What it could mean for Malta

Once constructed, the pipeline will provide a two-way natural gas passage, allowing Malta to export said gas from the LNG terminal at Marsaxlokk towards Sicily. Alternatively, Malta might be able to import the gas from Italy and do away entirely with the tanker, which isn’t to everyone’s liking. The planned pipeline has an estimated capacity of 1.2 billion cubic meters per year and a guaranteed flow of 141,000 Sm3/hour.

The land reclamation described above would consist of an area of around 8,000m², but the (possible) removal of the tanker could see a large portion of Marsaxlokk Bay to be used for other economic activities.

Should Malta keep the LNG tanker to try to turn a profit on gas export, or import gas from Italy and remove the tanker completely? Tell us in the comments!