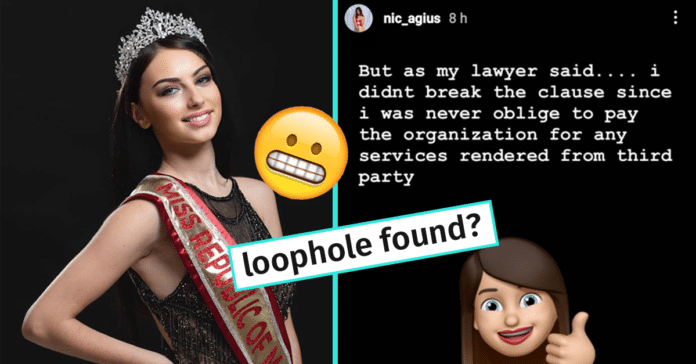 In a series of Instagram stories, Miss Republic of Malta 2020 Nicole Agius revealed details of how she was accused of breaking her contract, and the exchanges that ensued when she stood up for herself.

Though the contract seems to suggest that sponsorship income would be split between Miss Malta pageant and the participant, it appears Nic found a loophole, where free products are not included.

She also published screenshots dating back to October 2020, showing the Messenger exchanges and the clause in the contract being alluded to.

Meanwhile, she clarified that being a model, she receives free services from brands, shops, designers and the like in exchange for promotion on social media. She explained that Miss Malta demanded payment because she was promoting a service that she was given for free, and this was not included in her contract.

Now, while we won’t wade into the legalities of the matter, it did take a strange turn, when rather than calling Nicole, it was her parents who were contacted…

Was Nicole right in taking this stance? Let us know in the comments!