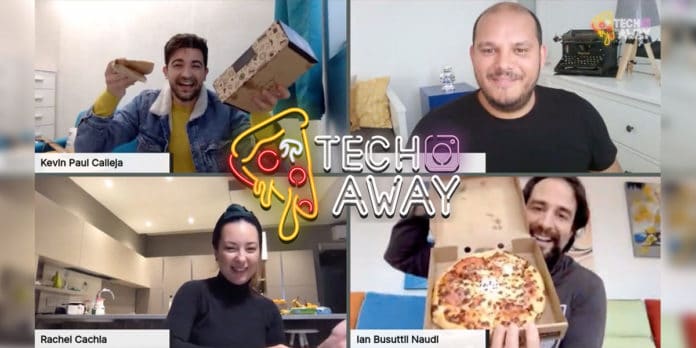 Gadgets is very excited to announce that a new online show has just been launched last Friday at 7pm. The show is guaranteed to keep us entertained whilst stuck in our homes.

Us Maltese love our Friday night takeaway treat after a week of work and this show includes just that – take out food delivered to all 4 guests including a scrumptious selection of some of the best pizzas from Pizza Hut, Amigo’s, Good Eats and The Oven. Ian finished off his pizza and was left hungry – no surprises there as the man eats for 4, Rachel wasn’t too pleased with what was ordered and would have preferred to have gone for a full blown meat Buff from Amigos even though she couldn’t finish her 16” pizza.

Tech Away is a light hearted, easy flowing, entertaining conversation between our Gadgets trio Rachel, Ian and Justin and a special guest.

Reasons to watch the premiering episode:

The first episode begins with the charismatic, tongue twister lover, Kevin Paul Calleja who storms into the video chat from behind a curtain with a face-mask and Spanish accent brandishing his Amigo’s pizza! What an entrance 🙂

Several fun filled highlights from this episode, including Kevin-Paul serenading Rachel for her birthday a couple of years back – for some unknown reason Rachel was served a watermelon with candles instead of the traditional cake. Justin teases that she must have been on a diet and quickly saves his a%! in typical Justin fashion.

It was only a matter of time till Kevin’s Tiktok antics were brought up. He revealed some of his video editing tricks and discussed a viral video which Rachel still didn’t fully understand why it went viral. Maybe it’s a generation gap sort of thing?

Towards the end of this episode Kevin was put into quite a few awkward positions and didn’t seem to remain as composed when the game ”Who’s Better” started. Kevin managed to get out of quite a few dangerous questions which could have landed him into a bit of trouble with his singer girlfriend Gaia – answering as a true diplomat, top man!

Tech-Away will be airing weekly every Friday at 7pm Live on Facebook. If you’re not able to make it on Friday at 7pm for any reason, there’s no need to worry! You can watch this video on the Gadgets Facebook page at a time that’s convenient for you.