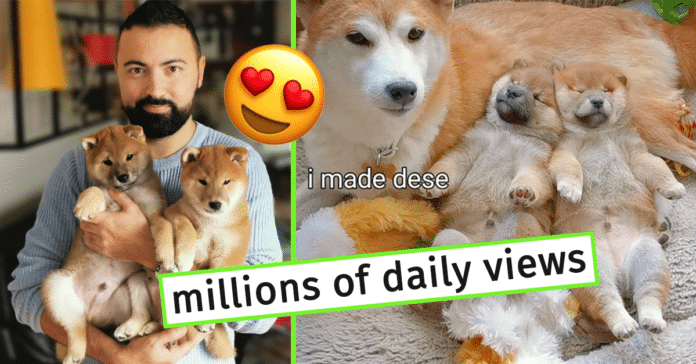 With over 630,000 subscribers on YouTube, ShiroSuki is a YouTube channel with a bigger population than the island its creator is from. That’s right. The channel with videos generating millions of views a day belongs to Oliver Tabone, but there’s a lot more to it than just YouTube!

“Our main audience is from America and India”, explains Oliver, “but we’re also the only Maltese channel on Bilibili, China’s answer to YouTube”. With millions of views on each channel, the dogs are a worldwide sensation.

But how did the journey start? “Luck, I guess!”, says Oliver. “It had much to do with me not having enough space on my phone after I’d recorded Suki giving birth to her first puppy”. Not wanting to lose the precious video, Oliver uploaded it to YouTube and left it there, more as a happy memory than anything else.

The video started getting traction from time to time, leading to YouTube notifications that people were subscribing to my channel. “To tell you the truth, I had no idea what that meant. I searched on YouTube on how one can make money on the same platform because for me it was just a myth…and now we’re here”, here meaning working on reduced hours and YouTube as a part-time income.

The stars of the show

The channel is based around two adult Shiba Inus, Shiro & Suki and their subsequent 4 litters. They had 10 puppies in total, or as they are known online, Potats. And each video is a sight to behold, and each one will have your heart melting just a little bit more.

So how does Oliver get round to creating the content? “I do everything through my phone; recording, editing, uploading…so there’s no need for a PC”. That also means that filming can be done from any location, as long as the moment’s right.

As for Bilibili, the channel is administered by a US Company, who manage the channel, translations, and uploading. “They use my YouTube vids and upload them in Bilbili, where we’re doing quite well” revealed Oliver. To watch the videos there, open the link, right-click and select “Translate to English”. Now enjoy more doggo and potat content.

What the future holds

Could a disruption be on the cards sometime soon? Apparently so, as Oliver confirmed that another dog will soon be joining the family. “We’re also looking at moving into a bigger house with a larger outdoor space for the dogs to enjoy”, he enthused, excited that the family’s all set for growth!