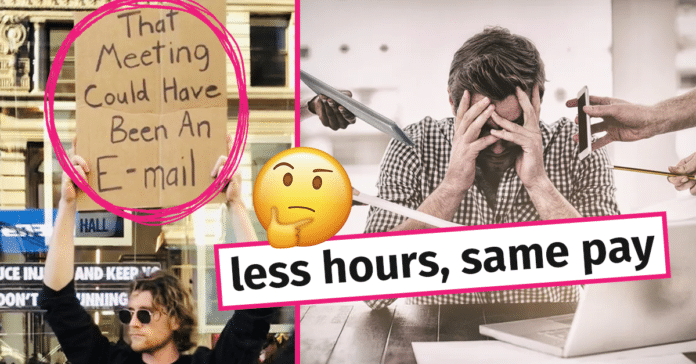 The routine of the 9-to-5 job started back in the 1920s, made popular by Ford Motors, as it added structure to employee hours, ensuring that they were not being exploited. Fast forward a couple of years, when overtime began being factored in, productivity began to be measured by the number of hours put in, which is by no means the same thing.

Though studies have proven that more work leads to more stress and a drop-off in productivity and mental and physical health, it comes as no surprise and stands to reason. With that in mind, a case is being made to shorten the working week to four days, and there are a number of benefits that come with it, for employees and employers alike.

It’s been a year (almost two) of intense upheaval in our professional and personal lives. Technology allowed many industries to switch to complete remote or hybrid working. With many enjoying the switch-up, in turn, that led to increased productivity and more tasks being accomplished. However, persistent “over-achieving” is difficult to maintain if working in excess of 40 hours per week.

Many industries at this stage are now pondering: “Are we better off switching to fewer hours per week to protect our staff? How about an entire day?” While some have opted for 36-hour weeks, others are shaving off a full day, and given the benefits associated with such a move, it’s easy to see why.

The fact that there are fewer hours available to work streamlines the employee’s mind in this scenario. Keeping focus for eight hours straight simply isn’t as sustainable as we might have thought before. Stretching attention spans for that long is impossible, which leads to losses of productivity. In fact, the term “cyberloafing” was coined to describe when employees opt for a mental break on the job to surf the Internet or social media, because they find it impossible to focus on the task at hand.

So, what’s the answer? Some say six hours per day is the standard we should aim for, while others say seven. The truth is that numbers don’t lie, and in a study in Iceland, 2,500 government workers across diverse workplaces trialled 35 or 36-hour weeks with the same pay. The result? The majority of offices saw productivity either remained the same, or even improved.

Work also becomes more streamlined, with people less likely to organise needless meetings. More time off means more time for exercise (mental and physical), more time to spend with family and friends and pursuing other hobbies. All this leads to less stress and an overall healthier lifestyle.

Why pay must remain the same

Pay is of course a crucial aspect of any job. Though it shouldn’t be the only metric by which we judge job satisfaction, the reality is that it’s only through a decent paycheque that we can live, rather than simply survive. So, if productivity levels either remain the same or actually improve by working fewer hours, it’s that output that justifies the wage, and not the hours worked.

Keeping the team together means saving on any costs linked to replacing the outgoing employee, both in financial terms as well as in expertise.

Can it really work?

Of course, there are limits to the idea. It can’t work across all industries, especially those that are customer-centric. Also, it can’t simply be rolled out from one day to the next, as plenty of structural changes would probably need to be made. Would employees need to be on call instead? Do employees actually want it in the first place?

However, the studies and trials being conducted appear promising, although not everyone trying it out is keeping the employees on the same wages. However, as mentioned, it depends on the industry and the productivity levels attained whether working 40, 50 or 35 hours a week.

Any implementation of such a system demands careful attention from management, but if there’s a time to try it, it’s now. The pandemic still has us in “change-mode”, which means we’re more receptive to trying new things without bias. So, if working less means everyone gains, it’s worth a shot.

Do you agree with working fewer hours a week? Why? Tell us in the comments!