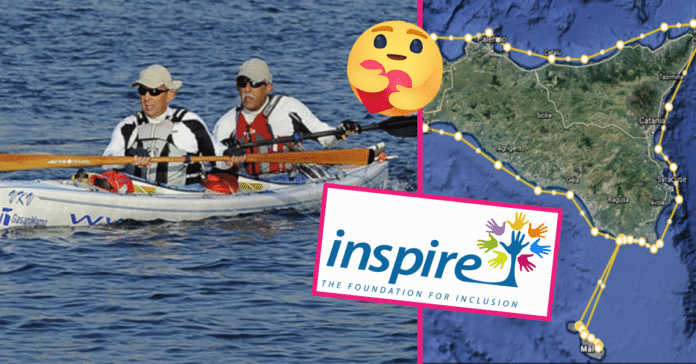 Two Maltese buds, Dorian and Albert, have embarked on a journey across the watery divide between Malta and Sicily, but there’s a bit more to it than a simple A-to-B kayak paddle. The duo will travel around Sicily’s coast before heading back to Malta, a mammoth effort to raise money for Inspire Foundation​.

The first kayak adventure was held in July 2008, organised by Dorian, where they raised €32,000 but apart from that, Dorian and Albert forged a friendship more akin to brotherhood, and this year they’re aiming to raise €50,000. If not for Inspire, then donate in appreciation of two men over 60 years of age as they complete this epic journey.

The duo carries all their gear such as food, clothes, electronics and camping equipment with them in their two-person kayak. They also held a meeting with the search and rescue arm of the Armed Forces of Malta where they shared details of the trip. They also get detailed hour by hour weather forecasts from the MET office.

Sitting at just under €12,500, there’s still some way to go before they reach their goal, but it’s still early days in their journey too, as they’ve only just reached Sicily just after midnight, having kayaked a total of almost 19 hours.

The challenge, which will see Dorian and Albert traverse over 1,000km, is a first for Malta, and quite possibly the world, in terms of route.

What Inspire Malta does

Inspire Malta provides individuals and their families with educational, therapeutic and leisure services, also advocating for inclusion and education on disability in Malta. They help hundreds of people with various types of disabilities and also hold the best knowledge on disabilities on the island.

Support the Kayak for Charity initiative by donating here.