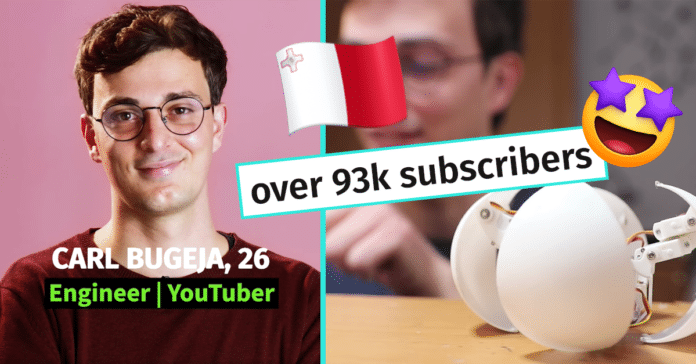 We recently featured local engineer and YouTuber Carl Bugeja, who’s the first of his kind to achieve the level of success he has in Malta. Almost 100,000 subscribers is a feat for anyone, but to reach that specifically through engineering puts him at unicorn-level rarity.

Throughout the interview, his joy at what he’s achieved is evident, but he’s not reached this point by accident. “I was working 40-hour weeks, sometimes more”, he explains. “I was doing all these projects in my free-time, limited as it was, so I then had to take the next step: self-employment via YouTube“.

This led to a move to a new garage, where he could run this new ship. How did he manage to do it though?

“One of my biggest challenges was surpassing 1,000 subscribers, as until that point, people don’t really know you. Another was being comfortable in front of the camera. By nature, I’m not someone who enjoys it, but you’ve got to overcome your insecurities to reach your goals!”

The evolution is evident – if you track the videos from 2018 up to today, it’s not just the camera quality that improved. The growing confidence of someone who knows he’s in his element is apparent, but his talent was spotted in his early days too.

Journey across the pond

The first video he posted, he also shared to hackaday.io, which is an American website for engineering enthusiasts. It then made it to the main website, where not only did his popularity increase, but he also travelled to the US to show them his creation and take part in a competition. From there, he continued uploading to this website as well as his own YouTube channel, which kept growing.

As a word of advice for any budding YouTuber, Carl says you’ve got to beat your own excuses. “It’s kind of scary because you’re putting yourself out there where you’ll be judged by the people watching.” Whether it’s your voice on camera that you don’t like, or like Carl you’re a bit camera shy, his advice is simple, yet effective.

“Just start. Forget the excuses and start, because it’s the only way you’ll ever get to where you want to be”.