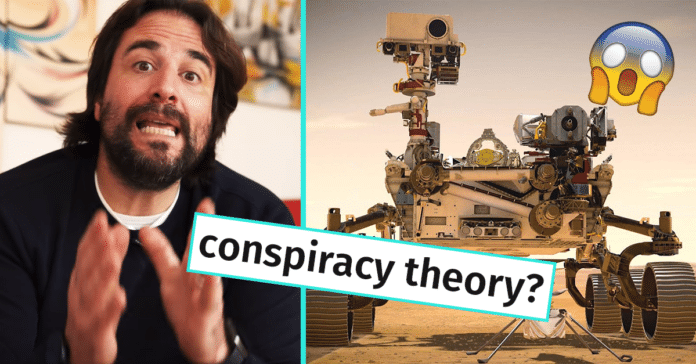 Gadgets presenter by day, intergalactic detective by night? It appears to be so for Ian Busuttil Naudi at any rate. With the successful landing of Perseverence and flight of Ingenuity, two of Earth’s robots visiting Mars, while everyone was focused on the images being sent back to our planet, Ian had his eyes on something else…

Ian’s questions were aimed at the accessories Perseverance is carrying. Why the need for a sundial and why were those particular images chosen? Is that a pyramid in the background? And what’s weirder: the images, or Ian choosing this moment to post on Instagram? Is it really him?

The truth! We think…

Much as we’d love to run with the theory, the explanation is not as exciting.

The instrument’s primary calibration target, which doubles as a sundial for educational purposes, includes colour and grayscale swatches. These help scientists ensure the cameras’ colour settings are correct, given that the position of the Sun and the dustiness of the sky can affect the lighting in images. “Two Worlds, One Beginning,” refers to the idea of Earth and the Red Planet growing out of the same proto-stellar dust.

Besides the motto and swatches, the sundial displays small line drawings of early life forms on Earth, including cyanobacteria, a fern and a dinosaur. There’s also a man and woman similar to those on the Pioneer plaques and the Golden Record. It’s all in tribute to Perseverance’s astrobiology mission, searching for signs of ancient microbial life on the planet’s surface.

Yeah, we’re going to stick with Ian’s version. Not as plausible, but that’s EXACTLY what NASA would want us to think, right?!