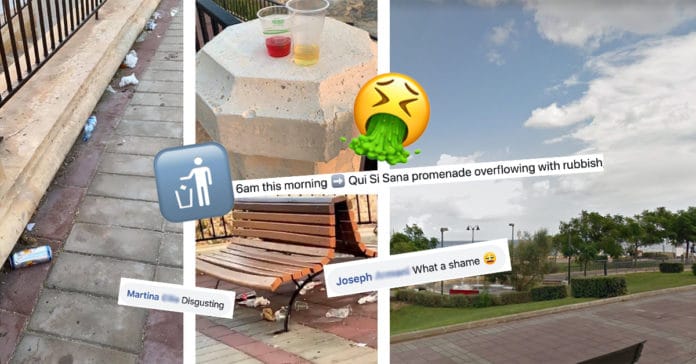 You may have seen the Gadgets team working out with Mark Galea Pace in Qui Si Sana earlier this month, and the scene is almost perfect. Shining sun, blue sea in the background, a clear promenade and the green grass in between. Fast forward to 6AM on Saturday, and it’s a maddeningly different picture.

There are various levels of ignorance one can descend to, but when it comes to littering, that’s when the digging starts and we reach new lows. As shown by our own Martina, this was not merely a case of overflowing bins (which we know to be the case sometimes). This is rubbish spread across the walkway, benches and green spaces, almost deliberately.

Now we’re not here to stand on some high horse, claiming that we’ve never had a drink or two outside, but as we head for 2021, we’re still having the littering conversation. Some might be inclined to say that there are two beach clubs nearby and should be responsible for cleaning the surrounding area, but there’s a larger issue. Evidently a large number of people lacked the common decency to throw away their rubbish where they’re supposed to. Cameras and increased fines might put people off from throwing away their rubbish where they stand, but for once, technology and gadgets should not have to provide a solution. This is supposed to be basic human decency in a modern society.

This damage has been done, and all we can hope is that whoever was responsible for this mess is capable of reading, and is reading this piece. The least you can do is to dispose of your waste correctly from now on. If you want to go one step better, stop someone if you spot them littering, and make it your good deed for the day.

Better yet, you could also join a clean up organised by the various voluntary groups around the island.