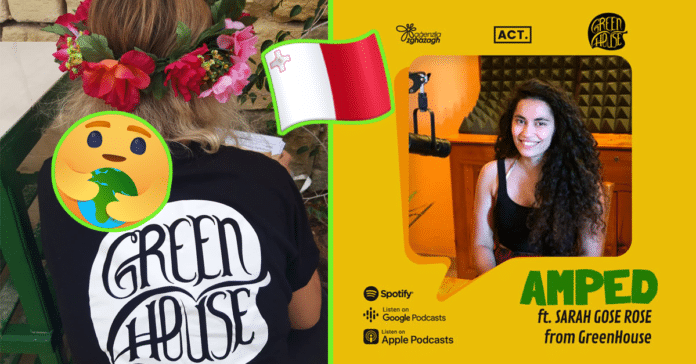 Amped is a podcast, hosted by ACT, aimed at exploring the Maltese voluntary sector and some of the names behind these noble achievements. Sponsored by Aġenzija Żagħzagħ’s BeActive scheme, and have already interviewed popular names like Żibel, but this time, we’re taking a look at their latest episode, where they spoke with Sarah from Greenhouse Malta.

A 10-year activist (does that make her a veteran already in Malta?), Sarah’s interest in the environment stemmed from a Systems of Knowledge project, which led her to join Greenhouse Malta. Though the name might imply that they tackle mostly issues surrounding greenhouse gases and other emissions, from the podcast it’s evident that there’s a lot more that Greenhouse Malta concerns itself with.

From biodiversity to human rights as well as social justice issues, the voluntary organisation is, as it says itself, “big on research, empowering anyone interested in taking part as citizen scientists”. Since the team is predominantly made up of scientists, they take a scientific approach to solving some of Malta’s environmental issues.

They also won an award recently!

Greenhouse won the Best Community Project Award at the 2021 National STEM Awards for two initiatives of theirs; Wild for Orchids which engages and encourages active participation in the protection of the beautiful orchid species Malta is home to, and Akustika, which aims to improve local knowledge of bat species within the Maltese community by using scientific evidence.

One worrying issue brought up during the podcast, however, deriving from the above-mentioned conservation efforts, is the drought Malta continuously faces. When asked if she’s seeing Malta drying up, Sarah laments that yes, this is the case. But it takes a turn worse than that.

“If reverse osmosis were to stop, we wouldn’t have enough water on the island to last two days”. The understatement of the year would be to call this unsustainable, and yet we cover more and more roads with tarmac that doesn’t allow water to filter through. It just runs off the surface, and the little rain that we get…well, most of it is lost.

What can we do?

We need to stop focusing on solving issues as individuals and work as a collective. But when their efforts are not well met, such as providing information about supposedly protected areas that are nonetheless marked for development, it gets hard to continue giving a damn. So what can be done?

Caring about the different facets of the environment is becoming more “mainstream”, as Sarah put it. From there, we can start pushing on, but it’s those in power who need to be willing to introduce more drastic measures, if we’re ever really going to see change for the better take place.

To listen to the full episode, you can click here, but we’d recommend visiting Amped’s Spotify channel to see just what’s going on in this little island of ours.