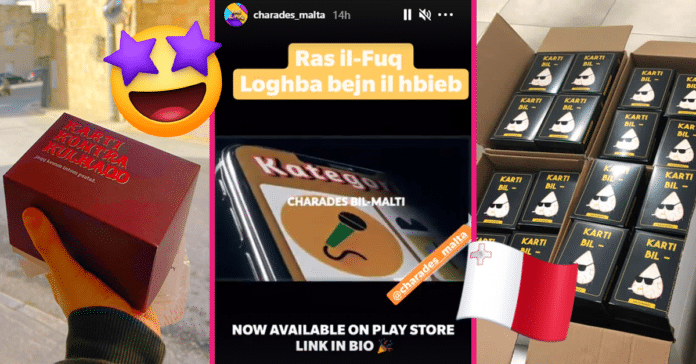 We’ve said recently that the Maltese language is getting some much-needed love, and it’s showing no signs of slowing down. With Karti Kontra Kulħadd, Karti Bil-Bajd and now Charades Bil-Malti, it’s great to see popular group games getting the Maltese treatment!

For the time being, but hopefully not too far off in the future, these games verge on the side of counter-culture. We’re so used to the English variations that it will take some time for the Maltese versions to take hold, but when you the local twists to these games, it makes for a hilarious time with friends. When that becomes a thing again.

The important thing the above trio managed to get right is that they didn’t just literally translate the games that inspired them. They took that inspiration, added Maltese twists and came out with something that’s relevant to their audience. The fact that Karti Bil-Bajd went a step further and added QR codes on some of the cards to add access to the original videos is a touch of…class? Let’s just say it’s a nice touch and be done with it.

Although Ras il-Fuq (literal translation of heads up) hasn’t garnered the same popularity as Karti Kontra Kulħadd and Karti Bil-Bajd, it’s certainly getting some celebrity endorsement, with even Ira Losco taking the time to mention that it’s looking interesting.

It’s still early days for them, and the app can be downloaded via the Google PlayStore (sorry Apple users), but we’re guessing it’s only a matter of time before it’s more widely available!

Which other popular games would you like to see get the Maltese treatment?