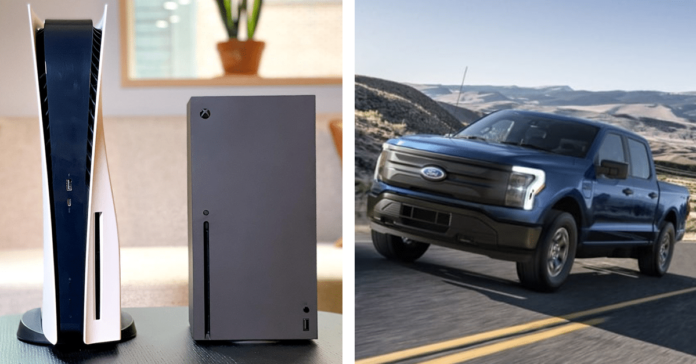 Ford’s F-series pickup has been its best-selling vehicle for 40 years and counting, including the recent F-150, which has received the electrification treatment. Now rebranded as the F-150 Lightning and expected to remain the company’s top seller, Ford wants to avoid scalpers getting their hands on the vehicles on the day of launch by introducing a clause in dealers’ contracts that would prevent buyers from reselling the vehicle immediately.

With that being proposed, we got to thinking; could Sony do something similar with the PlayStation 5, which continues to be elusive, thanks to chip shortages as well as bots reportedly laying claim to any that become available?

Is it even legal?

The main issue to deal with is a legal one; can Ford actually tell people what to do or not do with their vehicle once they’ve bought it? It hasn’t stopped them from trying, with the company sending a notice offering to help dealers prevent 2022 F-150 Lightning buyers from reselling their trucks. If a dealer chooses to add a no-sale provision provided by Ford to its contracts, buyers would have to agree to “not sell, offer to sell or otherwise transfer ownership interest in the Vehicle prior to the first anniversary of the date hereof.”

The notice also warns dealers against trying to raise the prices of the trucks themselves, which is also interesting. It stops people from ripping a profit off of willing buyers, but some have criticized the move as Ford preventing people from doing what they want with their own private property. Demand for the vehicle is going to be high, given the scarcity of similar products available in the near future. Therefore, Ford’s move is one that aims to reward people who genuinely want/need the vehicle, rather than those who want a quick payday.

Ford is aiming to produce 150,000 F-150 Lightning models by the middle of next year, which gives a snapshot of how scarce the product is going to be. In terms of competition, the electric Silverado won’t start production until April or May 2023, Rivian revealed that models with expanded batteries were delayed until 2023 with no precise date revealed, whereas Tesla’s infamous Cybertruck was recently spotted on a test track but lacks a solid release date. So, yeah. The F-150 Lightning is going to be in high demand.

We’ve been here before

The same thing happened with the most recent gaming consoles, the PS5 and Xbox Series X. Between reduced production numbers and scalpers gobbling up any stock that becomes available, genuine buyers have been few and far between, reduced to stories of inspiration and perseverance. Could Sony and Microsoft introduce similar limitations to the above on anyone who buys their consoles? It’s certainly worth a shot.

For the manufacturers, it’s easy for them to simply say that they sold the product at market value, and any resales are either out of their hands, or it’s not their fault if people are ready to pay exorbitant prices to get their hands on these consoles. Retail outlets end up selling out so quickly, that such drastic measures might actually be required.

So, do the manufacturers owe it to willing (and dreaming) customers to make an effort to thwart scalpers for at least one year? The situation is so dire, that many would probably agree that a legal ban on reselling these products imposed by the respective brands could actually help. And if not the manufacturers, could local retailers take it upon themselves to impose these parameters?

The worst-case scenario would be that scalpers get their hands on the devices just the same, only to hold onto them for a year, depriving others from owning for even longer. It seems unlikely that Sony or Microsoft would try anything of the sort at this stage, but one can dream…