Films You Should Get Excited About in 2023 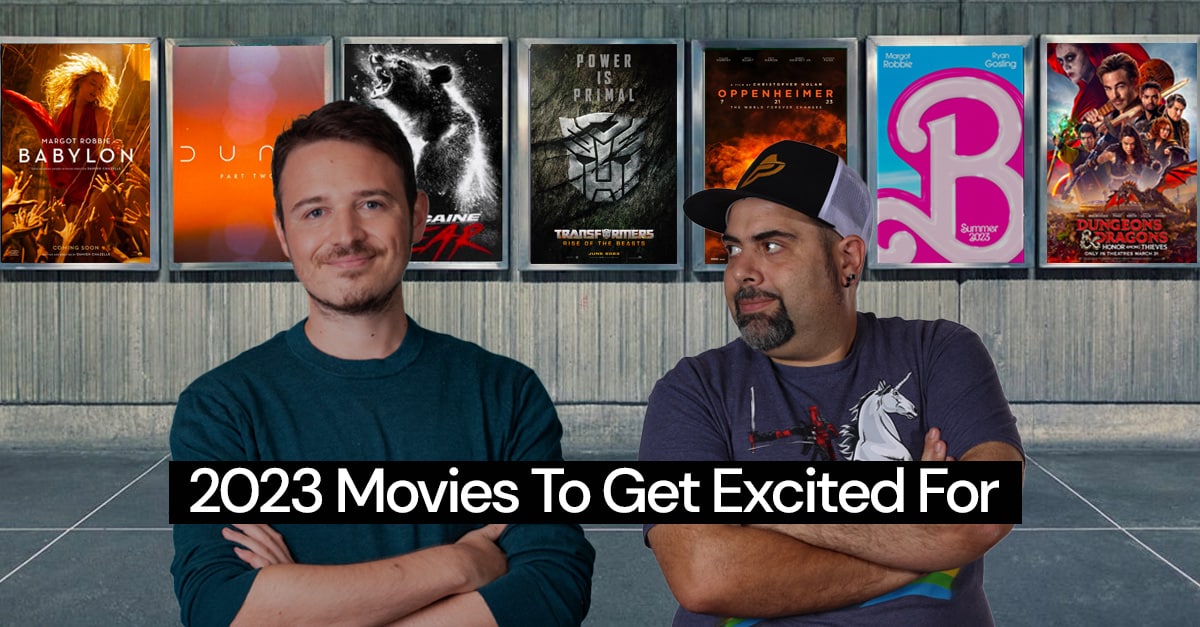 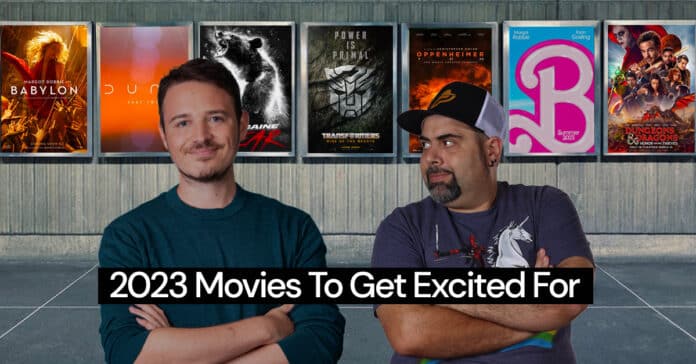 2022 has come and gone, it was a year full of amazing and not-so-amazing movies, however as 2023 approaches our two movie buffs Bruce and Ashley have decided to share the ten films they are most excited for and as expected their respective lists couldn’t be more different…

This is going to be one of the craziest movies of the year, a horror comedy unlike anything that’s been seen before. The trailer had me both laughing out loud and saying WTF, I cannot wait to see this movie which is “based on a true story”

The Meg (2018) was a blast: big, dumb summer fun that made boatloads of cash. A sequel was expected…but no one could have predicted it would be directed by Ben Wheatley. The British auteur has brought us distinctively strange films like A Field in England and Kill List, so it’s mouthwatering to imagine what he’ll do with this jumbo-sized blockbuster.

The live action adaptation is bad, ok I know that but as a kid it was fantastic…however it is now time for a proper adaptation of the legendary video game, and from what we’ve seen of the trailer it seems that they will be adding elements from other Nintendo games too…like Mario Kart, Donkey Kong and Smash Brothers.

Yorgos Lanthimos is a highly divisive director. His offbeat dark comedies, such as The Lobster and Killing of a Sacred Deer have been showered with acclaim by critics while leaving many audience members cold. After the Oscar-winning ‘The Favourite’, Lanthimos is reteaming with Emma Stone for an odd psychological sci-fi about a woman whose mind is replaced with that of her unborn child. An intriguing mix of morbidity and surrealism that sounds entirely Lanthimos.

Ok…hear me out…I love silly wacky movies and this has all the makings of that. Not to mention Margot Robbie is perfectly cast as Barbie, this is either going to be amazing or terrible…there is no middle ground. Also this is probably going to be this years Minions, so in other words the “meme” movie of the year.

Ridley Scott has achieved what Stanley Kubrick never could: wrapping production on a Napoleon biopic. Whether it’s any good remains to be seen, but this has a lot of promise…Scott certainly knows his way around a historical epic, and his reteaming with Joaquin Phoenix in the title role is VERY exciting.

There are 3 franchises from my youth that I hold dear and two of them have movies coming out in 2023… and this is the first one. I am super excited for this new animated adaptation of the Turtles, especially as Seth Rogen who is a lifelong fan of the franchise is producing it. (FYI the other franchise I love is He-Man)

Bruce’s #6. KILLERS OF THE FLOWER MOON

Scorsese is back with a true crime drama that finally unites him with both his leading men, Robert DeNiro and Leonardo Dicaprio. Based on the true investigation into the Osage Indian murders that took place in 1920s Oklahoma, this is a period epic seeped in oil and violence.

Ashley’s #6. ANT-MAN AND THE WASP: QUANTUMANIA

My one hope for this movie is that it finally gets Marvel back on track in terms of direction, as all of the movies in phase 4 have seemed like stand alones with nothing connecting them. So hopefully we will start to see a overflowing storyline that will lead to a big Avengers event.

Ari Aster, the mastermind behind ‘Hereditary’ and ‘Midsommar’ returns with a surrealist horror comedy that spans decades of Beau’s (Joaquin Phoenix) life, set in an alternate reality. A reality that includes, apparently, ‘supernatural threats’. We’ve no idea what to expect, and that’s just the way we like it.

Ashley’s #5. GUARDIANS OF THE GALAXY 3

I love the GOTG movies and I really can’t wait for their next adventure, although I must admit I am worried not all of them will survive this time. With James Gunn once again writing and directing its sure to be both funny and emotional, oh and it should have yet another kick-ass soundtrack.

Dune (2021) was an instant sci-fi classic. It transported audiences to a richly detailed universe that felt as real as it did other-worldly. However, it was, ultimately, only half the story, ending on a rather abrupt cliff-hanger. Here’s hoping director Dennis Villeneuve can end his Frank Herbert adaptation just as well as he started it.

The first Meg movie was one of my favorite movies of 2018, seeing as I am a massive fan of the books its based on. Although not a perfect adaptation, it was still a lot of fun and I cannot wait to see more giant shark action as well as something else (well if they keep to the plot of the second book that is).

Talk about counter-programming… Greta Gerwig’s secretive Barbie film will be released on the same day as Christopher Nolan’s Oppenheimer, and is just as exciting! The witty teaser trailer hilariously recreates Kubrick’s 2001. Who could have guessed that? The film will also star the supernaturally charming Ryan Gosling as Barbie’s himbo boyfriend Ken.

Careful, Oppenheimer, Barbie’s on your tail.

Ashley’s #3. SPIDER-MAN: ACROSS THE SPIDER-VERSE

The first movie was one of the biggest surprises ever, as no one expected it to be passable, let alone amazing (this due to it coming from the same animation studio that made The Emoji Movie). The sequel will again feature a number of different Spider-Men and crazy visuals which made the original an Oscar winner.

After the mind-bending Tenet, Christopher Nolan returns to history, with a visceral portrait of theoretical physicist J. Robert Oppenheimer, the so-called ‘father of the atomic bomb’, played by the always brilliant Cillian Murphy. The trailer is mesmerising, powered by a formidable score by Ludwig Göransson.

Look i’m a sucker for fun action comedies and this adds fantasy to that mix. The cast is fantastic and the banter between the characters shown in the trailer is spot on. Not to mention it is directed by John Francis Daley & Jonathan Goldstein who directed the amazing Game Night.

Undoubtedly Steven Spielberg’s most personal film yet: an autobiographical depiction of how his love for cinema began, along with the breakdown of his parent’s marriage. This is already a front-runner for the Academy Awards, and could well nab the master his third Best Director Oscar. A hugely emotional paean to the power of movies that includes a surprising cameo by none other than David Lynch. In short, a cinephile’s dream.

Ashley’s #1. TRANSFORMERS: RISE OF THE BEASTS

I’m a Transformers fanboy, however even I didn’t like the last few Michael Bay adaptations…however I loved Bumblebee (which was much slower movie) and this is a sequel to that (It seems the studio has just forgotten the Bay movies). This also introduces Beast Wars to the franchise and from the trailer it looks like it will mix the emotion of “Bumblebee” and the action of “Bayformers” and if they get that right it will be one hell of a movie!

So there you have it, who do you think had the better list, Bruce or Ashley? And which movie are you most excited about? One thing is sure, 2023 should be yet another interesting year in cinema, so grab your popcorn and nachos and lets enjoy the ride.