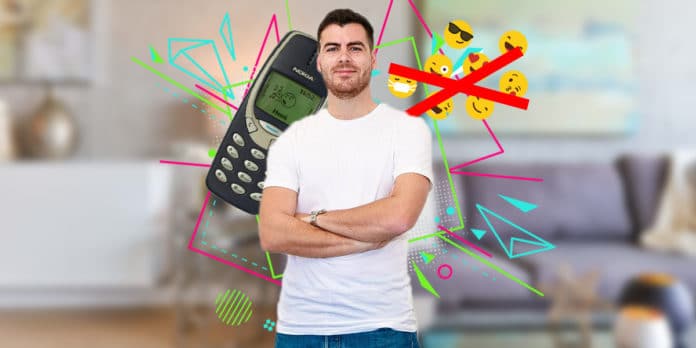 We spoke to 34 year old Steve Zammit Briffa who thought he’d had enough of his phone buzzing being at everyone’s beck and call ready to answer instantly, not to mention the amount of time wasted endlessly scrolling up and down news feeds throwing useless information our way. Steve placed his mobile and laptop in a drawer replacing them with a trusty Nokia 3310. He set a week deadline and bid his friends farewell with the below message on Facebook.

Steve a non-practicing lawyer who owns an event planning company said how shocked he was to receive a notification showing he had spent 7 hours screen time which he found absolutely ridiculous.

”I had spent 24 hours of my week on Facebook, I was wasting so much time, which could have been spent much better. I have a kid, and even though I was present physically next to my son, I wasn’t present mentally.’

So why has he chosen to go through with virtual distancing when we’re already social distancing?  Steve told us that this has been on his mind for quite some time. From morning till evening he would scroll his Facebook feed, wasting precious time and fill his head with useless information. Being stuck at home sounded like the perfect opportunity for him try this out.

So how did he manage to get through the boredom of quarantine without his smartphone?  ”Well it wasn’t too exciting as we’re locked inside at the moment. When there were moments of boredom, I’d go next to my son and think of new activities and play games. I’ve even picked up a book for the first time in months, so at night before bed I’d read an interesting book instead of scrolling up and down Facebook.”

What about FOMO? Steve did feel void and he missed communicating with friends, but received daily updates from his wife, sometimes doubting if her updates were actually true after she informed him that Boris Johnson and Prince Charles had contracted coronavirus. However, he did not miss seeing cat videos and having to reply with smiling emoji’s and LOLs for a video he had seen multiple times over.

There are pro’s and con’s to social media and technology, ”everything should be done in moderation you don’t need to go off the grid completely.”

Would he try this again? Without a moment’s hesitation, the answer was an immediate ”No” – The lesson Steve takes from this experience is that life can be more enjoyable not being a slave to your phone, and it did help clear his mind with less distractions popping up on his phone every couple of minutes.

Will you manage to stay offline for a week during this historical time of isolation?