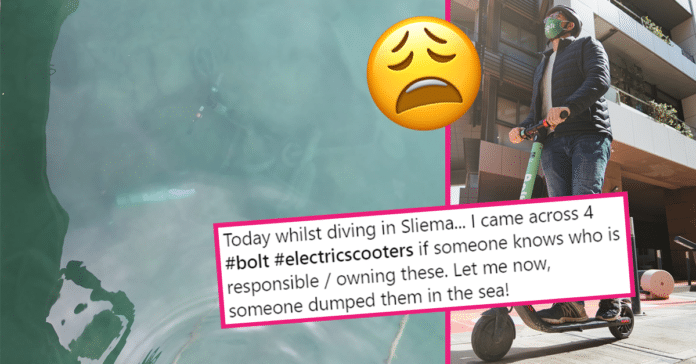 A diver took to popular Maltese Facebook group Are You Being Served to call attention to 4 Bolt Electric Scooters that were dumped into the sea in Sliema. The discovery has led to widespread anger and calls for police intervention.

The discovery was made by a Maltese diver, seemingly on a routine dive and is asking for assistance in locating either the last person to rent the eScooters, or if anyone has any further information.

The mood in the comments section ranged from incredulous to sarcastic, with some questioning whether they can charge up electric eels, or maybe the resident fish ordered takeout?

In any case, if anyone has further information, they are encouraged to get in touch with the relevant authorities or Bolt themselves. Though these scooters do have tracking devices and through the app, the person to rent the scooters can be tracked, there’s also the possibility that they were taken without consent.

Until the time of writing, Bolt was unavailable for comment.