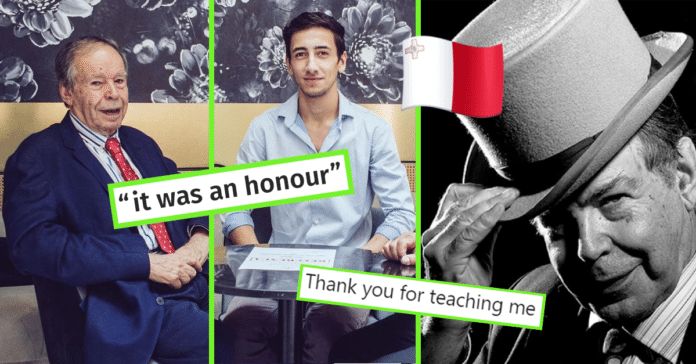 The name Edward De Bono will forever be associated with creativity, lateral thinking and innovation. Achieving all this and seeing his genius celebrated and his death mourned across the globe should, once and for all, rid Malta and its people of the “small island mentality” that besets us. This one mind in a million repeatedly stated how an idea put into motion is way better than one that remains locked up in the confines of your mind.

Does that seem obvious? Yes. But how many times have we stopped ourselves from pursuing an idea before it even takes hold? De Bono was an inspiration to many, and as one can read below, he was an influence across all corners of the globe.

One local lad that De Bono surely held in esteem is Zach Ciappara, founder of the student app FreeHour. Citing De Bono’s wisdom, Ciappara no doubt drew plenty of inspiration for the successful app he’s built from the great man himself.

Leonie Baldacchino, director at the very Edward De Bono Institute at the University of Malta shared a heartfelt post, saluting De Bono as one of UOM’s “most successful and accomplished alumni”. She also cited one of his most famous contributions in the shape of the “Six Thinking Hats” which continues to be widely used until this very day.

Joe Woods, another one of Malta’s leading creative thinkers, has fond memories of Dr De Bono. “In his presence, I used to be surprised by his humility. He really helped me understand the biblical dictum that no prophet was a prophet in his own land. May God grant him eternal rest and may more people be inspired by his work.”

“Dr Edward de Bono’s work was simple but at the same time profound. I have seen children aged 7 years and older, youths, adults and third age people enjoying the use of his creative thinking skills.
He was not just an inspiration but he empowered other people to inspire through creative thinking. His genius will continue to inspire in years to come.” – Joe Woods

Tributes from across the island poured in, from politicians, students, business people and so many more. His passing may have united the population for a brief moment, so let’s hope it’s used to inspire the next great thinker of our time.

And from distant shores…

Swiss-based entrepreneur Alexander Osterwalder took to LinkedIn to salute De Bono as the father of Lateral Thinking. Some commenters on the post also pointed out how, unfortunately, despite his incredible success, De Bono is still overlooked in some circles.

A Barcelona Business school, EADA Business School, also paid tribute to De Bono’s genius, also as one of their alumni. Professor Franc Ponti Rica from the school was effusive in his praise. “The master of masters of creative thinking has left us. The impact of his work is sensational. De Bono taught us to think differently through his six thinking hats, his lateral thinking and his creative provocations.”

Megha Srivastav, a recruitment adviser in Canada recalls meeting De Bono in person with butterflies in her stomach, but also reiterates how his legacy should serve as inspiration.

A Diversity and Inclusion lead at a company based in India, Jyoti Nair, was certain that De Bono’s “Six Thinking Hats” theory is her favourite. “A powerful and easy-to-implement technique that encourages diversity of thought, perspectives and…a holistic approach”. Couldn’t have said it better ourselves.

The celebrations of his life and accomplishments keep flooding in, as we said, from all over. So, let’s take this moment to appreciate how one man from a 316 km² island shaped the thoughts of thousands, maybe even millions of people, and will continue to do so for many more years to come, even as he rests in peace.

“If you wait for opportunities to occur, you will be one of the crowd.”