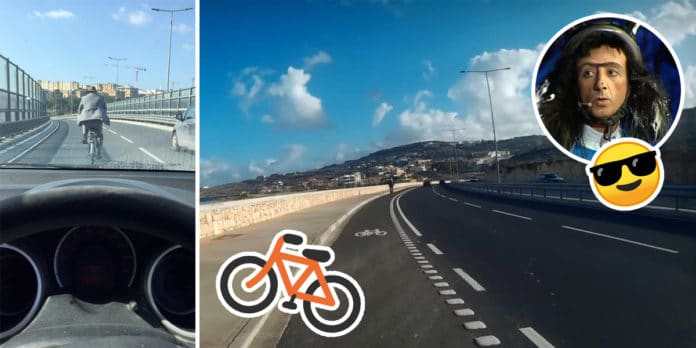 Most of us in Malta complain about the car situation in Malta. There’s just too many of the damn things on the road. Other european countries, like Holland and Denmark have embraced cycling as a way of life: it’s greener, healthier and easier to park. So why hasn’t Malta done the same? Well, one bright Junior College student named Isaac Sam Camilleri decided to find out for himself, and sent us an excellent article with his findings.

Over to you, Isaac.

Malta one of the smallest nations in the EU with the highest population density, despite its tiny size, has a very high rate of car usage. Being a student myself I decided to investigate why bikes to commute are not so popular. I investigated this by interviewing the president of the NGO Bicycle Advocacy Group BAG, my college Principal, Transport Malta (TM), Infrastructure Malta (IM) and the Minister for Transport, Infrastructure and Capital Projects, Dr Ian Borg.

A short survey was sent online to students attending my college. This showed that the vast majority travel by public transport and only just 0.7% of students commute to school by bike.

When asked why they don’t commute by bike the 3 most cited reasons were: No safe bike routes, Lack of driver education and that there isn’t enough driving law enforcement.

Junior College principal Mr Paul Xuereb explained that the college supported bike users by installing 2 bike racks. The College also took part in a project called ”Promoting Sustainable Mobility Choices in schools”, supported by Nature Trust Malta-FEE and TM. Participants were given a voucher to spend on bike-related material so long as they cycled to school. The Principal was considering the possibility of introducing extra-curricular bike lessons for students in the future. He contemplated that if students’ bike/or walk to school they will become more independent and be healthier for themselves and the environment.

Ing. Fredrick Azzopardi (CEO of IM), said that through his work he hopes to promote: Safety for all users, Sustainability, Quality, and efficiency of Malta’s road network. Through ongoing national infrastructure roadworks such as the Santa 0 10 20 30 40 50 60 70 80 Bus Car Walk Bike How do you travel to school? Student Response Lucija underpass, Marsa Junction Project and the Central Link Project, IM is creating over 14 kilometres of new cycle lanes and segregated cycle paths. This also includes pedestrian and cycle bridges which will make crossing major roads easier for everyone and improving the ferry service for easy crossing by sea.

TM follows the National Transport Strategy 2050 which envisions: Sustainable transport system, which is efficient, inclusive, safe, integrated and reliable for people and freight, which supports attractive urban, rural and coastal environments and communities where people want to live and work: now and in the future.

Mr Joseph Bugeja who is the Chairperson and CEO of TM explained that for every new project, TM makes sure that bike infrastructure is planned from the beginning. In his opinion, our climate, terrain and lifestyle are holding people from changing the way we travel and so TM are opening schemes to promote technology such as the use of the pedelec. It is also working on educational campaigns involving cyclists to share their experience in their campaigns. TM is grateful to all those promoting cycling on the national agenda. He also admitted that currently our island does not have the best infrastructure and dangers still exist, but he is disappointed that some people/groups are portraying it worse than it really is because this is counterproductive to TM’s efforts.

TM recently released a new legislation regarding micro-mobility, and they are continuing to build and support its growth. This involves promoting transport sharing where the user changes from one mode of transport to another. When Mr. Bugeja was shown the students survey he said that he is concerned about low bike usage by students as they are the future.

In its bid to promote road safety, TM constantly meets with NGOs through the ‘Malta Road Safety Council’ where they are currently searching safe bike routes via secondary roads. TM also have a directorate dedicated to law enforcement on our roads which helps to make the roads safe for everyone.

BAG is an environmental NGO which aims to promote alternative means of transport, especially bikes. Dr Attard Tonna (BAG president) stated that they are not asking for any special privileges, but they are asking for a segregated cycle lane where possible and when not possible more education campaigns and enforcement. When asked regarding the use of ‘armadillos’ she stated that when used in high speed roads they are still dangerous and should not be used. A challenge which they are facing is with the authorities as they only comply with their request so long as cycling lanes will not interfere with the general traffic flow. She concluded that we need to make a change for our future and left the question “why is building safe road infrastructure for all that difficult?”

Dr Ian Borg stated that Government and the authorities falling within the remit of the Ministry for Transport, Infrastructure and Capital Projects are working tirelessly to provide long-term and short-term solutions. He stated that for many years the country’s infrastructure was never improved to cater for the increase in car demand let alone cycling infrastructure, an element which today’s projects are addressing. He is of the opinion that widening roads and upgrading road infrastructure does not mean that people will opt to buy more cars but that people will be able to drive from point A to B quicker, ultimately contributing to a better quality of life and improved air quality. He concluded that they will continue to further push incentives such as car scrappage schemes, free public transport and investment in more ferry landing sites, coupled with actions that have already been taken, like the regularisation of certain markets such as car sharing and bike sharing. He believes this will prove to be crucial to change the local mentality, which is still predominantly car-oriented.

This investigation has shed insights into the major hurdles being faced by bike users (lack of adequate road infrastructure and lack of driver and cyclist education) and potential bike users who also share the same sentiments. Interviews with the respective government bodies strongly suggested there is consensus in improving the status quo. So it is really a matter of ‘cycling the talk’. More bike users mean a lower carbon footprint and a healthier lifestyle which target SDGs 3, 11 and 13.

It’s always encouraging to see such smart action being taken by  young adults like Isaac. Like our contributor, we need to push our country towards greener alternatives, and make it safe for  cyclists. If, like Isaac, you would like to share your research with us and get published on our website, please get in touch. We’d love to hear from you.