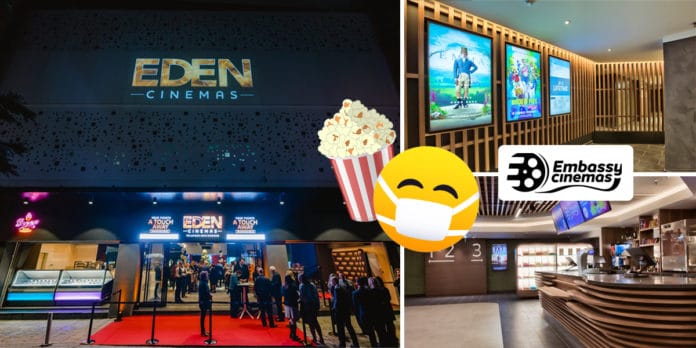 Cinemas need to catch a break.

Over the past decades they’ve competed against a lot. In the 50s, it was the rise in TV. In the 80s, it was video. Nevertheless, cinemas held strong. Then, they faced the ruin at the hands of piracy and online downloads…still, they weathered the storm. And just as cinemas were struggling with the impact of Netflix, along came the Coronavirus.

And that, it seemed, was that.

Curtains were Forced to Close

Cinemas around the world were forced to shut their doors. Studios delayed the release of films by months. An already dwindling audience was now non-existent. It was the biggest blow to cinemas since…actually, ever. Not even World War II could keep cinemas closed for more than a week.

Now restrictions have been lifted, cinemas find themselves in a strange twilight zone. Some  of the blockbusters they were relying on have been delayed, such as Bond and Black Widow, pushed to November.

Nevertheless, the good news for film and cinema lovers is that the two most popular local Cinemas will be opening their doors next week on Wednesday, 24th June. Both Cinemas have ensured that they have undertaken significant upgraded policies and operations to keep in line with hygiene and sanitation protocols which is the most important aspect.

“We have installed plexiglass at all bars and implemented social distancing in our public spaces and have policies on protective wear for food and drink handlers. We are installing technical solutions to space out where tickets can be purchased in order to ensure social distancing. This is being done through the ticketing software and will reduce capacity of theatres to about 20%.’’ Simon De Cesare, CEO at Eden Leisure Group.

Eden are also undertaking a number of technological upgrades to their systems to reduce further customer staff interaction and use of cash. Currently about 70% of all tickets are already purchased digitally through their App, web site and their Electronic Ticketing Machines.  Planning is also well underway to introduce online sale of bar items imminently to reduce further the use of cash.

“Currently, our priority remains customers’ health and we’re taking all steps  to ensure a safe environment. Our seats are made of wipeable eco-leather which allows for effective cleaning between each show, while our cinemas are equipped with a brand new air-ventilation system for constant and efficient air-changes in all areas.  Our objective is to create a safe destination which our customers can enjoy and relax in.”

Cinemas as a Community

It might be understandable for people to feel put off by the prospect of the cinema, when they can so easily see a movie in comfort at home. Film studios are becoming increasingly aware of this.

For cinephiles, this is scary news. Cinemas are holy ground for film lovers and the prospect of them being shut for good is a blasphemous prospect. Sure, TVs may be bigger, crisper and louder than before, but it’ll never equate to the transportive quality of a cinema auditorium. There’s a sense of community felt when a film is seen in a roomful of strangers.

Azzopardi from Embassy Cinemas feels that:

“The strength of cinema is the complete experience that it offers, from sharing the movie to immersing oneself completely without distraction. It is not just the film itself but the activity of going out with friends and family to relax and experience the magic of cinema.”

Does the delay of films like No Time To Die and Black Widow make recovery more difficult for cinemas? Mr. De Cesare fully agrees that it will be harder however would rather launch a blockbuster film when they can sell a full theatre as opposed to selling a small percentage of the seats.

Moreover, apart from these top movies, there are no massive releases until the beginning of August with the launch of Tenet, Christopher Nolan’s top film. Afterwards we are unsure with exactly what is planned to open. It is very difficult to not have visibility and this causes a lot of uncertainty.

Embassy will be opening with 7 films, while Eden will kick off with about 8 films. Some are older classic films, some were released recently and some were not launched locally but were planned to. Embassy will be showing Bloodshot and Fantasy Island (amongst other titles) while, similarly, the St. Julians Cinema, besides Bloodshot, will be also showing films like Paradise Island, The Grudge and The Public. The rest of the schedule and release windows are still being looked into.

Eden and Embassy may be able to screen the big hitters, like Christopher Nolan hugely anticipated ‘Tenet’ in July.  But there are the less mainstream theaters to consider too. Spazju Kreattiv is the local home for more arthouse fare, while the beloved Citylights cinema screens cult movies and classics. Will the social distancing rules affect these smaller theatres?

Cinemas need our support more than ever. While they will open their doors again soon, we need to make sure they won’t shut again. So book tickets, buy vouchers, watch movies, even if it means wearing a mask.

They can’t go the way of the video-store.