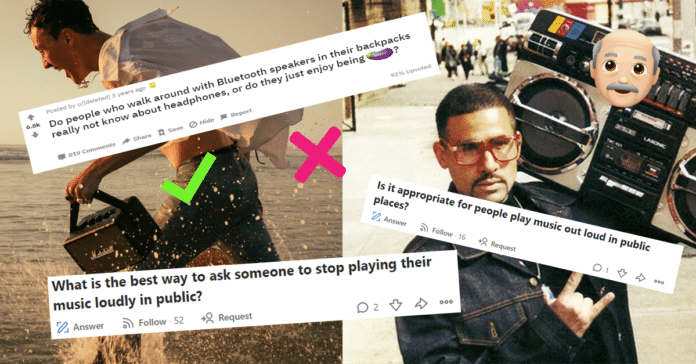 There’s no bad tech, only people who don’t use it as they’re supposed to. We’re looking at you, Bluetooth speaker owners who share their tunes with everyone, whether we like it or not. At the risk of sounding like a grumpy old fossil, (although this writer sometimes is) it is a first-world problem that is becoming increasingly annoying.

Just because you can, doesn’t mean you should.

Put simply; it’s rude. “The right to swing your arm ends where my face begins” is a quote that springs to mind. Just as you’d respect people’s personal space, you should be doing the same with any device you’re using in public. This also extends to watching videos or playing games in restaurants, on buses, flights…you get the picture. If you don’t, well, it’s time to take the hint.

It’s different to boomboxes in the 80s and 90s though. Back then, it was more of a community thing and possibly the only way to share music with your circle. Better yet, some boomboxes had mixing capabilities, so there was a tad more art to it than just blasting tunes. Almost everyone has access to the Internet nowadays, so sharing tunes does not need to be a public exercise…unless you intend to be as cool as this guy.

How to approach the situation

In instances like these, those making the noise are either convinced they’re doing nothing wrong, or know what they’re up to and will be hostile to any approach you make. Buying cheap headphones in bulk and handing them out could be one passive-aggressive solution, but if your peace is well and truly disturbed, then you’ll have to resort to (attempting) a reasonable discussion.

How would you approach the situation? Leave (if possible) and say nothing; stay and do nothing; or say something? Let’s get this discussion going!

And for the record, the Urban Dictionary term to describe people who play their music loudly in public is “sodcast”. You’re welcome.