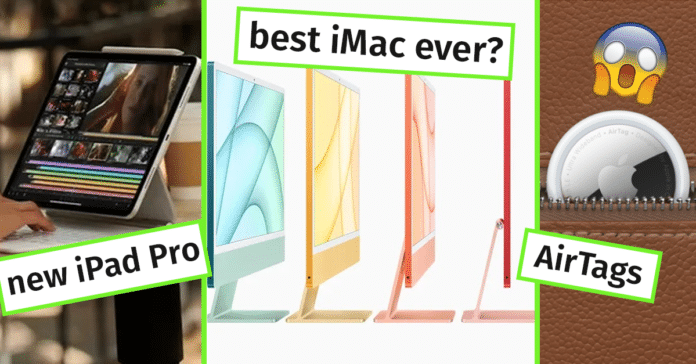 In yesterday’s Spring Event by Apple, the acclaimed M1 chip was added to the MacBook Air, Pro, and Mac mini computers. We also got to finally witness the launch of AirTags, but Gadgets’ big hope was to see the third generation of AirPods. Not to worry though, we’re sure it won’t be too long, and there’s plenty to gawp at from last night!

Let’s start with the ad for the M1 chip in the iPad pro. It’s a work of art and is sure to be a source of countless memes. But, onto the real stuff.

Two new iPad Pro models are available, measuring 11-inches and 12.9-inches and have options for 5G support. Apple says you can expect up to 10 hours of battery life from Wi-Fi models and 9 hours from Wi-Fi and cellular models.

The camera’s also been improved, and there’s also a new feature. The ISP and LIDAR scanner perform better than ever in low-light conditions. There’s a TrueDepth camera system on the front of the device, which allows users to unlock it with facial recognition.

There’s also a new system that includes a 12MP ultrawide camera with a 120° field of view. The camera will automatically pan to follow you around during video calls with a new feature called Center Stage. Noice.

AirTags are small circular tag will allow you to track items within Apple’s “Find My” app on iOS. Basically, they help with tracking items like keys or wallets, and you’ll be provided with notifications when you’re separated from your item.

The AirTag itself is a small disc-like device that includes a built-in speaker, accelerometer, Bluetooth LE, and a user-replaceable battery. It’s got a year of battery life, and you can use an NFC tap to activate a lost mode.

AirTag will be available for around €30 on April 30th, or €90 for a four-pack. Apple has also created a leather loop and key ring accessories that the AirTag can slot into, and the company is also working with accessory makers to create luggage tag enclosures for the AirTag itself.

Colour might be superficial to most, but this is a damn fine collection that’s so easy on the eye. But, if you’re looking at performance, the revamped iMac’s got it.

The 24-inch, 4.5K display also comes with an updated iMac camera and mic, along with a 1080p resolution and a larger sensor. Quieter, cooler, keyboards in matching colours and touch ID…they’ve also left the headphone jack in there, whether by default or design.

Last but not least, the Apple TV 4K was also revealed. Keeping the same name as its predecessor, this model comes with a more powerful A12 Bionic chip. This way, you can play HDR video at higher frame rates and is powerful enough to support 60fps Dolby Vision playback over AirPlay from a compatible iPhone.

The best thing is that the remote has been updated to improve the bad-tempered one from the previous model.

The new remote is thicker than the one before, with a five-way touch controller replacing the swipe pad, and a proper power button to turn off your TV. The Siri search button has been moved to the side of the remote, under your right thumb.

What do you make of these announcements? Will you be getting your hands on any of them?