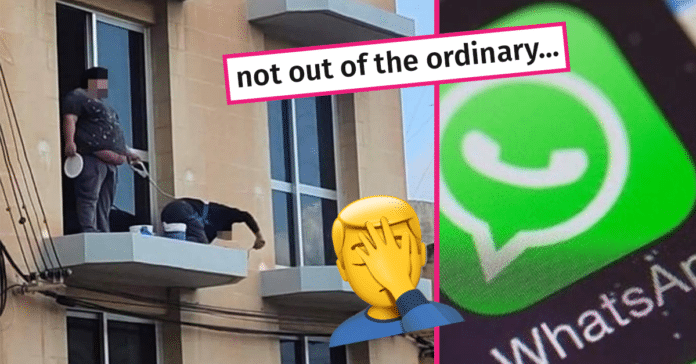 Hilarious? Horrifying? Habitual? All three actually. This viral photo of a man holding his colleague on a leash for safety has gone viral across the island, and it’s got people in a bit of a huff for a variety of reasons.

There’s the pose of the handler that, at first glance, will make you laugh at the simple absurdity of it. On second and third viewing, you being to realize “Hey, he seems far too relaxed for such a precarious situation”. Which can only mean it’s not the first time he’s done it.

Apart from the precarious position, neither is wearing any protective gear, despite their proximity to an exposed edge. The fact that, despite the absurdity of it all, Maltese people will know that it’s not something entirely out of the ordinary either.

Comments, of course, varied from jokes to insults to shock. Some said it might be a new fetish. Others suggested that if he does a good job, the guy lying down will get a treat. However, there’s no escaping that it’s an incredibly scary scenario that could have turned sour very quickly.

Is it high time we take health and safety seriously