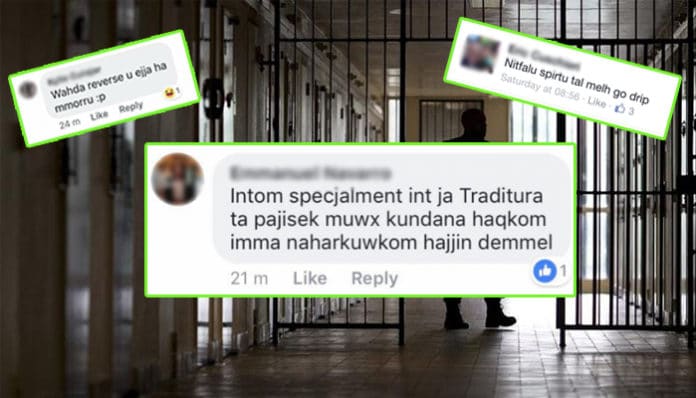 You may have heard the term Freedom of Expression. Three words that people stick by and oftentimes exploit to its fullest to make sure no one can tell them what to or what not to say. Freedom of Expression constitutes one of the essential foundations of a democratic society and one of the basic conditions for its progress and each individual’s self-fulfilment.

But where do you cross the line? What can you and can’t you say on social media? Here is a list of people who ended up in court over something said on social media.

Two men fined €3,000 each for racist comments on Facebook

Two youths were found guilty of hate speech and were each fined €3,000 by a court after posting racist comments to a Facebook page called ‘Daqshekk ghall-Immigrazzjoni Llegali f’Malta’ back in March 2015. This was one of the first ever happenings where people got into trouble for posting something on social media, well deserved.

Following a shocking hit-and-run on a Policeman, some people seemed to be rejoicing and passing comments in extremely bad taste. Three people were marched to court after posting hate messages on social media, hours after a Policeman was hit by an underaged driver which lead to the Policeman having to have his arm amputated and replaced with a prosthetic. 3 people spent 11 days behind bars for posting hateful comments such as “Wahda reverse, u ejja ha mmorru,” and “at least one policeman should be run over every day”.

A Syrian man was remanded in custody after being accused of repeatedly posting death threats aimed at individual police officers on Facebook. The charges came just six days after the man was released on bail, after being arrested for making Facebook death threats directed at various Policemen. The man in question is understood to use 3 different Facebook profiles, two of which he poses as a female.

The Facebook user in question, who said that MEP Roberta Metsola should be burned alive today, was sentenced to a six-month prison term suspended for one year. The 66-year-old had been charged with misuse of electronic equipment, inciting hatred, insulting and threatening Dr Metsola and breaching an earlier conditional discharge.

Recently, the Media and Defamation Bill came into effect. This aims to provide more protection for journalists and the citizen journalist. The government said that with this process, Malta will put an end to criminal libel and other similar crimes. These crimes were previously a serious burden on the freedom of expression and the full participation of the citizen in a democratic country. Bottom line is, you can be held responsible for what you say on social media, so think before you post something on Facebook. Whatever is on the internet, is there forever.

Do you think people should be liable for what they say on social media? Tell us what you think in the comments below.