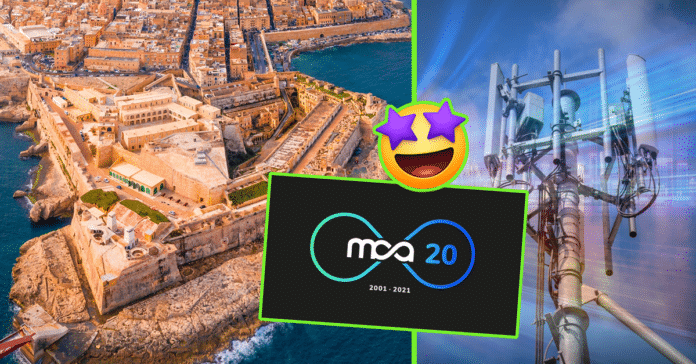 As the Malta Communications Authority celebrates 20 years since its creation, it’s only natural to look back at how far the Authority has come. Evolving from a monopolistic market to a fully liberalised one in 2003, foreign investment has been forthcoming from all corners of the globe, including the UAE, the US and the UK, resulting in the thriving competitive market we see today.

And while the MCA will be holding an event to commemorate the last 20 years, this presents a prime opportunity to look forward to future successes.

Before delving into the details of the event, it’s well worth taking a closer look at the role the MCA has played over the last couple of decades. Since being established on 1 January 2001, it has made purposeful strides, establishing a reputation as an independent, proactive and forward-looking regulator.

By extension, this has resulted in advanced and robust underlying infrastructure and regulatory regimes that are robust, along with increased innovation in view of consumer demands and tech developments. Of course, this led to improved services and products for the Maltese population to benefit from.

20 years of progress makes for a bright future

For many, it’s still easy to recall the days of having to choose between Maltese or Italian television, given the monopoly that was in place in the 1980s and 90s. Though things did progress throughout those years, establishing the MCA in 2001 is what really kicked things off. From promoting eCommerce in 2002 to revising the legal framework in 2004, then strengthening the information society in 2008, it was a busy decade, but more was yet to come.

ICT-centric innovation, helping create the eSkills Malta Foundation, and adding over 460 public WiFi hotspots ensured the 2010s were kind of hectic too. While no one anticipated a global pandemic in 2020, the communications industry responded well to the challenges posed, in no small part thanks to the infrastructure and agile industry fostered by the MCA over the years.

So, with 20 years of progress made and challenges overcome, the November event will set the platform for plenty more to come. Robert Mifsud, Chief of External Relations at the MCA said: “Although the event is to celebrate the anniversary, it’s the perfect time to use the past as a launchpad for the future.

“Looking back on the past 20 years comes with a sense of achievement, but moving forward, the Authority continues setting its sights on new goals, maintaining the momentum of our digital progress. The future offers exciting prospects, though we must be mindful of challenges and gaps which cannot be overlooked as our digital reality continues to materialise.”

The MCA’s role extends even further beyond our national borders. Ensuring Malta’s continued presence at the forefront of the implementation of certain technologies requires the Authority to play an active role at EU level. In October 2020, CEO Jesmond Bugeja was elected as Vice-Chair within the Body of European Regulators for Electronic Communications (BEREC), a significant moment for the MCA.

Further to that, the MCA has also just been appointed Digital Services Coordinator for the EU’s Digital Services Act (DSA). It’s another landmark achievement that puts into perspective the MCA’s digital regulation journey. Its support and guidance to the Government in adopting the European Electronic Communications Code (EECC) was also key, but there’s more.

When the EU proposed full gigabit connectivity, with 2030 as a deadline date across the continent, Malta went a couple of steps further by implementing it well in advance, all thanks to the guidance from the MCA.

In keeping with the times, the event will be conducted in a hybrid fashion through a live stream. This will allow both those participating live and remotely to interact. Speaking of remote attendance, while the physical event is by invitation only, there’s no limit on virtual participant numbers, so anyone can join in virtually!

The conference will take place across two sessions on 25 November 2021, one in the morning and the other in the afternoon. As mentioned, the event presents the opportunity to look at the past, present and future of the MCA, as well as the digital future in store for Malta. Speakers will include EU Commission representatives, regulators, as well as chief executives, key industry stakeholders, academics and digital ambassadors.

Among the topics on the agenda, guests can expect a discussion on the opportunities and challenges that lie ahead of us in this digital decade, safeguarding against the rise in cyber threats, the opportunities 5G brings in connectivity and plenty more.

A promise to keep moving forward

Aspiring towards greater goals is only part of the MCA’s mindset within the industry as they adapt their regulatory approach in real-time and keep pace with developments on a global scale. This way, Malta is ensured to maintain its position as a leader within the EU during the next stage of this digital transformation.