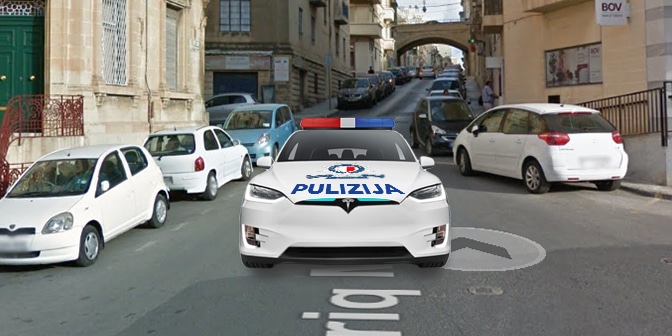 Teslas and Elon Musk’s The Boring Company are the epiphany of innovation within the technology sector and beyond. I mean, who other than Tesla were able to send software updates to their cars wirelessly and seamlessly over two years ago?

Unfortunately for the environment and local innovation, a Tesla on Malta’s roads is not a common sight. This could partly be to blame on the lack of help given to people who are looking to join the electric and hybrid car movement.

In England, we have seen BMW i3s being used as police cars, so you can’t blame us for imagining what Maltese police cars would look like if they were electric and caused less harm to the environment.

We’ve taken the liberty to prove how cool the Malta Police Force will look rolling around in the Tesla model S and Tesla X respectively.

The electric car movement has to start somewhere in Malta. Electric cars are cheaper in the long run (with regards to running and maintaining), cause less harm to our health and the environment and are just flat out cool.

Do you think the Malta needs to see more electric cars on its roads? Tell us in the comments!